Located in east-central Africa, along the shore of lake Victoria, Uganda is one of the most populous countries in Africa. Its total population is growing at a fast pace and will not only be surpassing the 40-million mark in the next few years, but is expected to more than double by 2050. Despite the slow decrease of the average number of children born, Uganda continues to be amid the countries with the highest fertility rates worldwide. Still, the lack of access to clean water in various parts of the country, a high prevalence of HIV, and an elevated quota of fatal malaria, AIDS, and Ebola cases contributed to Uganda reporting one of the lowest life expectancies in the world, and a devastatingly high infant mortality rate.
The Republic of Uganda emerged as a fully independent state in October 1962, and until 1980, it experienced periods of economic prosperity as well as a dictatorial regime under Idi Amin, who, in order to maintain his leadership, often resorted to tyrannical violence. Only after Museveni came to power in 1986 did Uganda’s shaky political situation come to an end, as this brought some form of economic stability. Nowadays, president Museveni continues to be in office, and in December 2017, the parliament agreed on the removal of the presidential age limit, allowing him to rule past the age of 75, as it was previously stipulated. Uganda's capital, Kampala, is the most populated city and home to roughly 1.6 million people, whereas the rest of Uganda’s cities are quite small, ranging from a quarter of a million to one hundred thousand inhabitants. Uganda has a quite low degree of urbanization, the vast majority of the population is concentrated in rural areas, with only 16 percent of Ugandans living in urban cities.

Since it was hindered by political instability for roughly 20 years, Uganda’s progress and economic development were delayed. Nonetheless, the economy rapidly improved and it was reflected in the growth of the country’s GDP, which in 2016 took a small dip in an otherwise stable economy. With most of its inhabitants living in rural areas, Uganda's economy is mainly based on agriculture, as it accounts for most of Uganda’s exports earnings and for a large share of gross domestic product. The most-produced crops include coffee, cocoa beans, and sweet potatoes. The service sector accounts for more than half of the country’s GDP, with tourism being a major part of the economy. Due to numerous national parks, Uganda emerged as a tourist destination on the continent, accounting for a considerable amount of tourism-related receipts in comparison to other African countries.
This text provides general information. Statista assumes no liability for the information given being complete or correct. Due to varying update cycles, statistics can display more up-to-date data than referenced in the text.

Uganda and the coronavirus 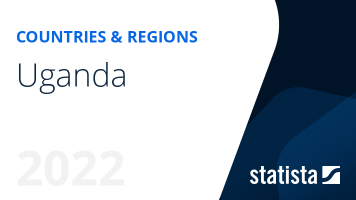 The most important key figures provide you with a compact summary of the topic of "Uganda" and take you straight to the corresponding statistics.