Published by Statista Research Department, Jul 7, 2022
WeWork is a provider of shared coworking workspaces and office services in 77 cities across 23 countries worldwide. Their clients range from tech startups and entrepreneurs, to more traditional small- and large-businesses looking to outsource or diversify office space. As of early 2018, WeWork was the second-largest shared office space provider in the U.S. market, leasing around 6.5 million square feet of office space. Moreover, the company has seen rapid growth in recent years, doubling its revenue from 2016 to 2018. In 2018, WeWork generated 1.82 billion U.S. dollars in revenue, and as of June 2019 was valued at 47 billion U.S. dollars.
The company was founded as a start-up in New York City in 2010, opening its first location in the SoHo district. The company’s founders, Adam Neumann and Miguel McKelvey, reported seeing a business opportunity following the financial crash of 2008, which saw the emergence of empty building space and an increase in the number of people starting new businesses or moving into freelance work. The idea to match these two trends attracted ample investment, with prominent firms such as J.P. Morgan Chase & Co, Goldman Sachs Group, and later Japanese conglomerate Softbank providing funds. Investment allowed for expansion into further U.S. cities, and then Europe and Israel by 2015. Their strategy of attracting investment to fund further expansion has continued, with a notable focus being placed on the Chinese market over the past few years.

Such a fast-growing market allows space for multiple providers. In the United States, the largest provider is Regus, who leased 224 locations as of 2018. This compares to 154 locations for WeWork at that time. Globally, Regus reported revenue of over three billion U.S. dollars for 2018 and employed over 8,700 staff. However, Regus’ growth in recent times has not been as rapid as that of WeWork – their revenue increased by around 14 percent from 2016 to 2017, and fell by almost three percent from 2015 to 2016.

In the following 4 chapters, you will quickly find the 24 most important statistics relating to "WeWork".

The most important key figures provide you with a compact summary of the topic of "WeWork" and take you straight to the corresponding statistics.

Sharing services in the U.S.

Gig economy in the U.S. 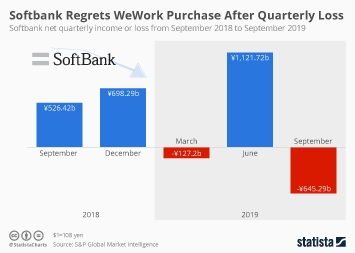