Ocean or hydrokinetic energy are better and simpler know as marine energy. Although this form of energy is still underdeveloped, it is an industry with impressive potential. There are five main types: tidal energy from the movement of water created by the tides, hydrokinetic energy from ocean currents, wave energy (or wave power), marine thermal energy, and osmotic energy, which refers to the energy that can be harnessed from the difference in salinity between seawater and freshwater. French people are aware of these energy types, with more than 73 percent of the population being acquainted with them in 2019.
Marine energy experienced a leap forward after 2010. Indeed, between 2010 and 2011, worldwide marine energy capacity doubled from 250 megawatts to 503 megawatts, respectively. It has slowly grown since then, exceeding 530 MW in 2018.

Compared to the rest of the world, the French ocean power industry was ahead. Of the 250 MW worldwide capacity in 2010, 216 MW could be produced in France. Contrary to other countries, French marine energy capacity has known few variations from 2010 and was estimated at 214 MW in 2020.

As mentioned above, marine energy encompasses multiple sources. The most widespread in France are installed offshore wind turbines. In fact, these accounted for 90 percent of the total revenue generated by marine energy in 2020. Unsurprisingly, most jobs in the industry had to do with installed wind turbines.

Wind technology is very present in marine energy. This existing production system allowed for faster development. As proof, floating and installed wind turbines were used by two thirds of companies in the sector. This trend is not expected to stop, since around 88 percent of investments in marine energy were captured by installed and floating wind turbines.

Ocean power is by definition geographically centered on coastal areas. Indeed, more than 450 million euros were generated in the Pays de la Loire region. Most of the turnover came from providers or suppliers in the value chain.
This text provides general information. Statista assumes no liability for the information given being complete or correct. Due to varying update cycles, statistics can display more up-to-date data than referenced in the text.
Published by Statista Research Department, Aug 2, 2022 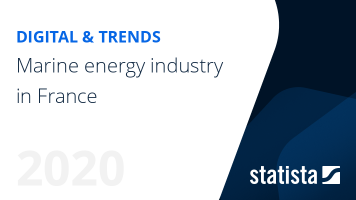 The most important key figures provide you with a compact summary of the topic of "Marine energy in France" and take you straight to the corresponding statistics.