Despite the coronavirus (COVID-19) outbreak in 2020, Mexico’s consumer electronics market has had an unstoppable development, recording its most significant sales volume in 2021, at over 178 million units sold. Moreover, the pandemic seems to have accelerated the market’s growth since consumer electronics was an essential sector, allowing companies to continue their operations during the pandemic. In 2021, Mexico’s consumer electronics sales revenue increased by approximately 6.5 percent, representing one of the highest increases since 2013. Additionally, the manufacturing of electronic components, as well as audio and video equipment, were Mexico’s fastest-growing industries in 2020. The city of Guadalajara in western Mexico - nicknamed “Mexican Silicon Valley” - has turned into a hotspot for software and electronics production, especially since it was chosen to host the official venue for the “Digital Creative City” project.

Smartphone sales have far outweighed the demand for other telephony devices. In 2021, smartphones generated over seven billion U.S. dollars in revenue, while other telephony devices, such as landline phones, recorded revenues of only 188 million U.S. dollars. When it comes to smartphone markets, Motorola had the highest share in Mexico, surpassing Samsung as of the fourth quarter of 2021, with a market share worth nearly 30 percent. However, the most popular Android phone in August 2022 was Huawei Honor 9X, with Motorola phones ranking second and third. Led by the urge for digitization and streaming, TV sets, radios and multimedia devices followed in sales revenue, with TV sets vastly surpassing computing devices, digital cameras, speakers, and headphones.

The consumer electronics market is strongly connected to the Internet of Things development, which currently represents one of the fastest-growing technologies in Mexico. Over seven out of ten people living in Mexico owned a smart TV, while nearly every household in the country was equipped with a TV set.
Given the omnipresence of mobile phones in expediting daily life activities, it is no surprise that mobile devices play a fundamental role in the growth of the Mexican consumer electronic market. Smartphones are the primary device used to access the internet and for music streaming. However, despite their unyielding demand, foreign electronic brands have far outcompeted the local products in the Mexican market. Consumers have been shown to prefer brands such as Huawei, Samsung, Apple or Motorola over leading Mexican producer, Lanix.
This text provides general information. Statista assumes no liability for the information given being complete or correct. Due to varying update cycles, statistics can display more up-to-date data than referenced in the text.

Primary device used to access the internet in Mexico
Smartphone

Overview of the Mexican market 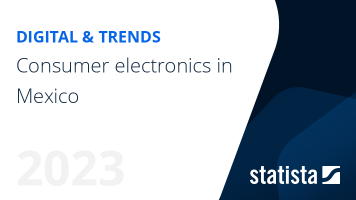 The most important key figures provide you with a compact summary of the topic of "Consumer electronics in Mexico" and take you straight to the corresponding statistics.