Published by Statista Research Department, Aug 2, 2022
The most consumed type of energy in France is nuclear energy. In 2020, more than 3 exajoules of energy used in France came from this energy source. Next come oil and natural gas. The leading renewable energy is hydropower, in fourth place. All these energy sources are used for different purposes.
However, nuclear energy, the first energy source in France, actually plays no part in the French heating network. Instead,natural gas powered more than a third of those networks in 2020. Energy recovery units and biomass represented more than 27 and 22 percent, respectively. Geothermal energy only accounted for almost 6 percent. That year more than 87 percent of this deep geothermal heat production was allocated to district heating networks.

France's energy mix is diverse. This can be observed in the heating network energy distribution. Around two thirds of heating networks were using at least two different energy sources in 2018. Despite the dominance of fossil energy, France constantly increased its share of renewable energy consumption in the heating and cooling sector in recent years, from 11.7 percent in 2005 to over 23 percent in 2020. Primary consumption of biogas in heating production is a classic example of the rise of renewables. In 2020, French heat production consumed almost 900 thousand metric tons of oil equivalent of biogas. A decade before, this number barely amounted to 80.

Overall, France ranked 16th among EU-countries regarding the share of renewable energy used in heating and cooling in 2018 with 21.8 percent, far behind countries such as Sweden and Finland.

In the following 4 chapters, you will quickly find the 27 most important statistics relating to "Heating in France".

Statistics on the topic
Share of the French population using electric heating in their main home
41%
Turnover of the collective wood heating sector in France
1.27bn EUR
Number of direct jobs in the heating network sector in France
6,300 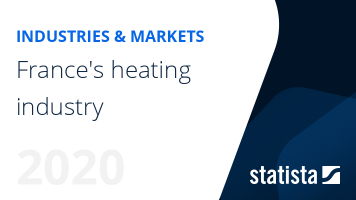 The most important key figures provide you with a compact summary of the topic of "Heating in France" and take you straight to the corresponding statistics.

Geothermal energy in the U.S. 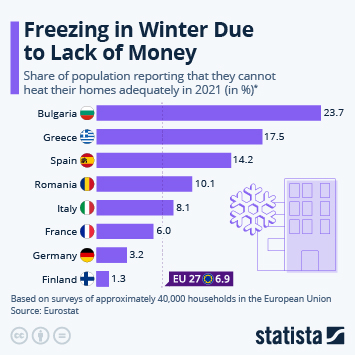