In Brazil, e-commerce on Black Friday continues to grow. The revenue generated from online shopping on that date nearly doubled between 2017 and 2020, when it surpassed four billion Brazilian reals (around 750 million U.S. dollars at November 27, 2020 exchange rates). In a year marked by COVID-19’s boost to e-commerce, Brazilian Black Friday’s digital sales had an annual growth rate of 25 percent, the highest since 2014. These historical accolades placed the day as the second online shopping season in Brazil in terms of revenue in 2020, only behind Lovers’ Day and ahead of heavyweights such as Christmas, Mother’s Day, and Father’s Day.

Little more than two out of five internet users surveyed in August 2020 expressed their will to shop on Black Friday that year. Nevertheless, those who did intend to buy items on the date planned to do so in a remarkably different way. In 2019, over one-third of them stated that they would exclusively shop at physical stores on Black Friday that year. In 2020, this group dropped to 16 percent, whereas the shares of users who said they would shop both at physical and online stores and only in online stores amounted to 55 and 29 percent, respectively. Regardless of sales channels, cashless options were on the top of the minds of Brazilian consumers. More than two-thirds of them preferred to pay for Black Friday purchases using a credit card.

In 2020, for the first time, the debate on whether the term “Black Friday” has a racist origin echoed in Brazil. Cosmetics company O Boticário, for instance, announced it would no longer use that expression and instead referred to the shopping season as “Beauty Week.” Meanwhile, the Public Defender office of the state of Amazonas recommended shopkeepers to avoid that nomenclature and instead adopt the term “Semana Promocional” (Portuguese for “Promotional Week”). However, before this conversation began in Brazil, this South American country already struggled with successfully applying that foreign concept to its consumer market. Between 2018 and 2020, the number of complaints against online retailers on Black Friday increased by 44 percent. The main problems entail logistics and communication. Undelivered products and false advertising were the issues digital shoppers most complained about.
This text provides general information. Statista assumes no liability for the information given being complete or correct. Due to varying update cycles, statistics can display more up-to-date data than referenced in the text.

Marina Pasquali
Research expert specializing in economy and politics
Get in touch with us now
Published by Marina Pasquali, Nov 24, 2022 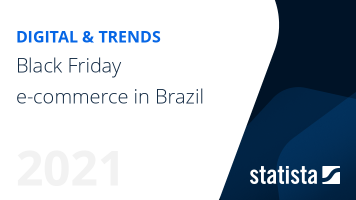 The most important key figures provide you with a compact summary of the topic of "Black Friday e-commerce in Brazil" and take you straight to the corresponding statistics.