Published by Statista Research Department, Jul 1, 2022
Indonesia is the second-largest rubber producer worldwide. It is no wonder that rubber is also the second-most important agricultural commodity in the archipelago after palm oil. However, its domestic consumption is significantly lower than its exports. There has been a slow decrease in the share of manufactures of rubber and plastic products to Indonesia’s GDP in the past few years, following the decreasing rubber production in Indonesia.

There are more than 50 incorporated rubber tree cultivation companies in North Sumatra, West Java, and East Java. Together with Kalimantan Island, these areas are Indonesia’s primary production areas of natural rubber, with Sumatra and Kalimantan as the largest employers of rubber farmers and farmworkers in the nation.

Indonesia has the largest rubber plantation in the world. But despite the significant size of Indonesia’s rubber plantation area, barriers to maximizing its potential still exist. Downstream activities, such as post-harvest handling, manufacturing, and processing are still not as significant due to the lack of infrastructure and product diversification. Without a new approach, Indonesia’s rubber industry would remain heavily dependent on the export markets in the next decades while its domestic rubber consumption stays low.

Besides the infrastructure issues, fungal attacks are also taking a toll on Indonesia’s rubber plantations. At the end of 2019, the outbreaks decreased Indonesia’s rubber production by more than ten percent. The use of low-cost fertilizers that were bought by farmers and plantation owners during times of low prices was one of the major contributors to this outbreak. It took about two years until the rubber production in Indonesia started to rise again. These issues highlight the importances of supporting smallholder rubber farmers in Indonesia. By providing better technical knowledge and financial support, it will not only reduce the livelihood threats to Indonesia’s smallholder farmers, but also secure Indonesia’s economy.

In the following 5 chapters, you will quickly find the 25 most important statistics relating to "Rubber industry in Indonesia". 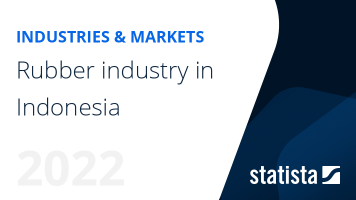 The most important key figures provide you with a compact summary of the topic of "Rubber industry in Indonesia" and take you straight to the corresponding statistics.