53k
74.6k
87k
88.9k
Liam Fox, the UK's international trade secretary, has said that the issue of the Northern Irish border cannot be settled until a UK-EU trade agreement has been reached. Ireland sees the border as a major obstacle to the negotations about the UK's future trade relationship. The Irish government has insisted there must be no hard border and Taoiseach Leo Varadkar has said he wants that guaranteed in writing before Brexit talks can move on.

The following infographic shows some key facts about the Irish border, one of Brexit's major flashpoints. It stretches 499 kilometres and interestingly, it has more crossing points (275) than the whole of the EU's eastern border (137). During the Troubles, the British army sealed off the majority of the routes between the Republic and Northern Ireland with only 20 of them remaining open.

Today, approximately 35,000 people commute across the border every single day. On a monthy basis, 177,000 trucks cross it, along with 208,000 vans. Every month, it also handles around 1.85 million cars. In terms of annual trade, goods flowing from Northern Ireland are worth €1.83 billion. Trade in the other direction is worth €1.9 billion to the Republic of Ireland. 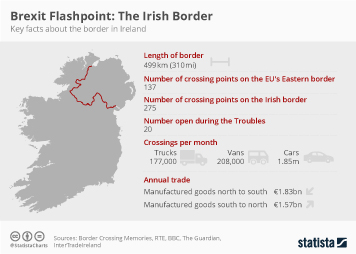 This chart shows key facts about the border in Ireland.