88.9k
The Scandinavian countries are well-known for their extensive welfare system, but does this automatically also lead to a higher tax burden for the residents? In some cases maybe, but definitely not always. When looking at the top 10 OECD countries with the highest tax-to-GDP ratio, Denmark leads the way, at nearly 46 percent. With 44.1 percent, the ratios of Sweden and Finland are also considerably higher than the OECD average of 34.3 percent. On the other hand, Norway and Iceland do not even make it into the top 10, at 38 and 36.4 percent respectively. Countries such as France and Belgium, which are traditionally not regarded as welfare paradises, score much higher than most of the Scandinavian countries because of high social security contributions.

It is noticeable that all countries forming the top 10 here are located in Europe. Elsewhere, the tax-to-GDP ratio is sometimes considerably lower. New Zealand (32.1 percent), Canada (31.7 percent), the United States (26 percent) and Chile (20.4 percent) have ratios that are all well below the OECD average. Europeans looking to move to places with a lower tax burden do not necessarily have to leave the continent though. Ireland, with a tax-to-GDP ratio of only 23 percent, is still a better choice than South Korea, Turkey or Israel (26.3, 25.5 and 31.2 percent). 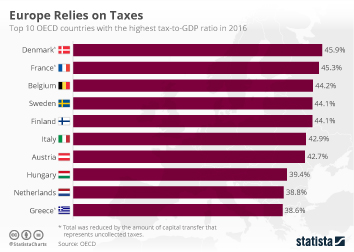 This chart displays the top 10 OECD countries with the highest tax-to-GDP ratio in 2016.