On Sunday, Japan held elections for members of the upper house of the National Diet. Abe’s ruling coalition won a comfortable victory, meaning it now has control over both chambers. This gives the prime minister a green light to press ahead with his new reforms, some of which include giving Japan more responsibility when it comes to international security.

His strategy is aimed at ending 15 years of deflation in Japan by increasing prices. After two decades of pessimism, turmoil and stagnation, things are finally looking up. Back in 2008, five percent of the Japanese public envisioned economic improvement over the course of the following 12 months. This increased to 17 percent in 2011 but skyrocketed to 40 percent in 2013, in the wake of Abe’s election.

Abe’s groundbreaking policies are finally eliminating the long felt mood of pessimism strangling Japan’s economic system. Going forward with a new air of optimism, Japan may be on course for a return to its long lost days of economic glory. 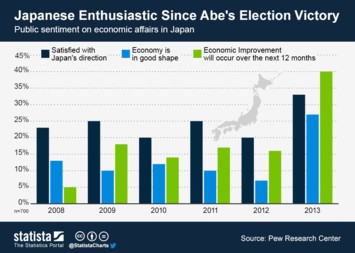 This chart shows public sentiment on economic affairs in Japan.