53k
74.6k
87k
88.9k
70 years ago, the United Nations for the first time deployed peacekeeping troops to observe and maintain a ceasefire during the 1948 Arab-Israeli War. The so-called United Nations Truce Supervision Organisation (UNTSO) is ongoing. Overall, the UN counts more than 70 peacekeeping operations worldwide, of which 15 are ongoing. Peacekeeping has always been is a risky activity. However, while a certain number of fatalities will occur, no matter how many preventive measures are taken, the number of deaths among peacekeepers is on the rise.

These deaths are caused by what the United Nations refers to as malicious acts, such as attacks on bases and convoys of its peacekeeping troops. In the five year period spanning from 2013 to 2017, 195 peacekeepers lost their lives under such circumstances, according to a recent report published in December 2017. Digging into data provided separately and updated until the beginning of March 2018 by the United Nations Operations and Crisis Centre, the number of deaths due to violence stands at 990.

The report comes to the somber conclusion that the countries who provide troops- and police to such missions "need to adapt to a new reality: The blue helmet and the United Nations flag no longer offer 'natural' protection." Overall, the report compiled under the supervision of former Brazilian General Carlos Alberto dos Santos Cruz advises that UN peacekeepers should adopt a more robust style of peacekeeping, in which the use of force features more prominently, against conflict parties that have become more diverse and include armed groups, terrorists, organized crime, and even street gangs. This in effect is prone to permeate the thin line between peacekeeping and peace enforcement operations. 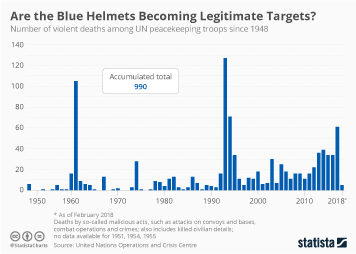