The number of students enrolled in language classes at U.S. universities is higher now than it was prior to the year 2000 and those students are also learning a more diverse set of languages.

Numbers by the Modern Language Association show that in 2016, the latest year on record, almost 69,000 students were learning Japanese, while 53,000 were enrolled in Chinese and 30,000 were studying Arabic. This marks a significant increase from 1958, when records at the MLA begin. In that year, Japanese had only around 850 students, some 600 people were learning Chinese and less than 400 were enrolled in Arabic.

Even between 2006 and 2016, Arabic gained around a quarter more students. Korean was the language with the biggest increase in learners in that time period. Their number almost doubled and reached approximately 14,000 U.S. students of Korean in 2016. In 1958, the number of registered Korean language learners at U.S. universities stood at 26. 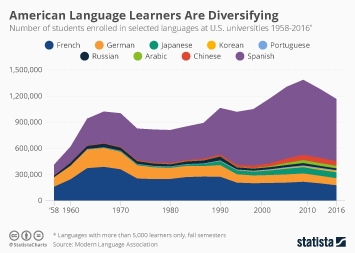 This chart shows the number of students of different languages at U.S. universities between 1958 and 2016.

Governors in the U.S.