According to a research paper published in late 2019 through the U.S. nonprofit National Bureau of Economic Research, some developed economies are among those who will suffer most – financially – from climate change.

From a standpoint that only takes into account the increased danger of floods, droughts, the loss of ecosystems and viable environments for human habitation, people in developing countries are most vulnerable to climate change destroying their homes and livelihoods. According to the research paper by Matthew E. Kahn et al., this conventional wisdom does not stand up to scrutiny when looking at GDP losses. The research concludes that GDP losses vary to a high degree across countries and also affect some developed countries severely.

Canada, the U.S., Japan and South Korea are among those expected to be suffering the biggest GDP losses if climate change is not stopped or severely slowed down, together with developing nations like Bhutan, Nepal, Kazakhstan and India. The developed nations mentioned above would already suffer losses under to the 2° C warming goal of the Paris Agreement, something that is opposite in European nations.

Also, while Himalayan nations would be affected by climate change to a very high degree, industries in colder developed nations like in Scandinavia could even benefit from warmer climates which would allow more farming and outdoor activity. 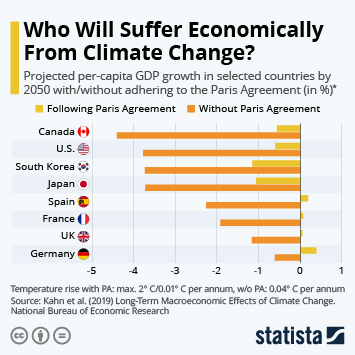 This chart shows GDP losses in selected countries due to global warming goals under the Paris Agreement and faster global warming without adhering to the agreement (2019).