Some of the largest cities in the U.S. have reported large numbers of people moving away for more rural portions of the country in 2020. Being cooped up in a small apartment for months on end due to the enduring pandemic has proved to be too tiresome for many, and those who haven’t been able to escape urban sprawl this year are at times undoubtedly yearning for greener pastures and wide-open spaces. A new Gallup survey shows how the desire to live in a rural or small-town setting has risen substantially over the past two years.

In a recent survey from Gallup, nearly half of all U.S. adults said they’d prefer to live in a small town or rural area in 2020. That’s a nine percentage-point increase from 2018, when just 39 percent of respondents said the same. White men over the age of 55 were among the most likely to prefer rural, small-town settings, however sizeable increases were observed in almost every measured demographic. Those between the ages of 18-34 had a 10 percentage-point increase over the last two years, with 39 percent preferring rural/small-town life. The largest broad demographic increase came in non-white adults, where a 12 percentage-point increase over the last two years has 39 percent who said they’d prefer more spacious parts of the country.

There’s no question Americans in less dense communities have had more freedom to continue some regular life activities during the pandemic, especially during the earlier months of 2020. COVID-19 swept through East Coast cities with ease, and other metropolises like Los Angeles are still seeing record case levels.

Still, as the virus has progressed throughout the country, rural areas have quickly become hot spots for the coronavirus, with per capita cases much higher than larger cities in many counties. That isn’t stopping people from wanting to move out of the city, however, and goes to show how many Americans may have been waiting for an opportunity to move into a quieter part of the country. With many still able to work comfortably from home or remotely, this could be the chance of a lifetime many city dwellers have been putting off. 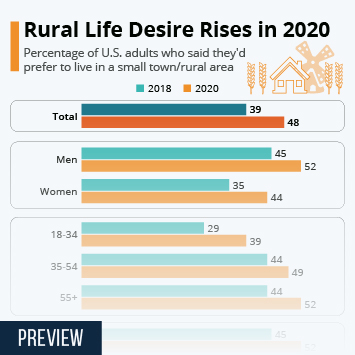 This chart shows the percentage of U.S. adults who said they'd prefer to live in a small-town/rural area.