Whether you're looking at revenues from their automotive segment or cars produced and delivered, Tesla has weathered the last two years exceptionally well, despite a global pandemic and the recent economic downturn caused, among other issues, by record numbers and the ongoing war in Ukraine. After a couple of less than profitable quarters for the company's side businesses, its secondary income flows have seemingly caught up to the car manufacturer's general profitability development.

As our chart shows, the "Services and other" segment contributed $56 million to the company's gross profit, though Tesla doesn't specify which services are included. Its endeavors in selling and installing solar panels and its battery solution Powerwall also became profitable after a net negative last quarter, earning the company $97 million, an increase of 385 percent year-over-year. Unsurprisingly, the corporation made the most money with sales of its cars, accumulating a gross profit of $3.9 billion including $344 million in regulatory credit income between April and July.

Tesla is not only the world's leading electric car manufacturer but also the fastest-growing brand worldwide. In 2021, it produced and delivered over 940,000 units, an increase of 87 percent compared to 2020. Its biggest competitors in the plug-in electric vehicle market in terms of 2021 overall unit sales are GM-SAIC-Wuling, BYD and Volkswagen.

The company and its products are not beyond criticism though. For example, even though it recently celebrated the milestone of 1,000 produced cars per week at its newest Gigafactory in Brandenburg, Germany, the working conditions at the plant came under scrutiny due to Telsa allegedly offering salaries below industry standards and therefore not being able to fill all the positions needed to ramp up the production quota further according to Business Insider. 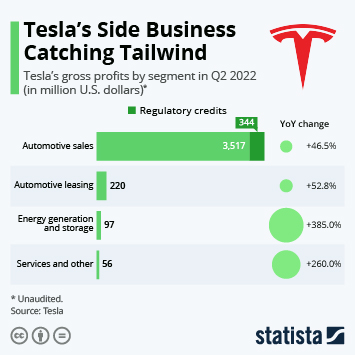