Published by Statista Research Department, Apr 4, 2022
Fishing is one of the most popular outdoor recreational activities in the United States. In 2020, approximately 55 million Americans flocked to the nation’s waterways to engage in freshwater, saltwater, and fly-fishing activities, marking the highest fishing participation rate in over a decade. In line with global participation trends, the number of hobbyists casting their rods in the United States is forecast to increase in the future – a development that can contribute to the health and well-being of millions of Americans of all ages, but also pose a challenge to regional ecosystems.

Who participates in fishing in the U.S.?

Motivations, barriers, and the future of recreational fishing

According to a 2020 survey, the top reasons for trying fishing for the first time were spending time with friends and family, trying a new hobby, and embarking on an adventure. The social component of fishing is frequently listed as a motivation among hobby anglers, as is reflected in the high average number of people per fishing trip. While some people prefer to fish alone, relax, and enjoy their peaceful surroundings, most participants choose to embark as a group. In 2020, the largest share of fishing participants went on one to eleven trips, though many occasional anglers would have liked to fish more. One of the leading barriers to recreational fishing was the lack of affordable access to boats and fishing gear. As the cost of U.S. fishing licenses tends to increase annually, financial hurdles may lead some potential newcomers to steer clear of the sport. The downward trend in fishing license holders can also cause conservation issues. While most recreational anglers preserve aquatic habitats, a lack of regulation of the number of people participating in one of the country’s favorite pastimes can lead to high stock exploitation, shifts in population structure, and even habitat destruction.

In the following 4 chapters, you will quickly find the 22 most important statistics relating to "Recreational fishing in the U.S. ". 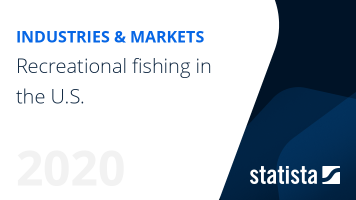 Go to report Recreational fishing in the U.S.
Top Seller

The most important key figures provide you with a compact summary of the topic of "Recreational fishing in the U.S. " and take you straight to the corresponding statistics.

Recreational boating in the U.S.

Hunting in the U.S.

Recreational boating in the UK