Published by
Aaron O'Neill,
Nov 30, 2021
Honduras is located in Central America with a large coastline on the Caribbean Sea and a much smaller coastline on the Pacific Ocean. Honduras borders Nicaragua to the south, El Salvador to the southwest and Guatemala to the west. Honduras has been and continues to be relatively unstable and plagued by corruption, poverty and crime. Unfortunately, the country also has one of the highest homicide rate in Latin America and the Caribbean. Despite remaining as one of the most violent countries in the world, progress has been made, as shows the notable fall in homicide rates during last years.

At present, Honduras has an estimated population of around 9.8 million inhabitants and more than half of them are living in urban areas. In ten years, the fertility rate in Honduras has dropped from 3.06 children per woman in 2009 to 2.43 children in 2019. This has reduced the annual population growth rate over the years, and despite the high number of homicides, the median age of the population is rising. Still, many inhabitants flee their home country to migrate northwards, to Mexico or the U.S., escaping from violence and striving for better life conditions.

Honduras' economy has been experiencing a yearly annual growth in the range of 3 to 4 percent each year except for 2020, and is expected to continue on this path. However, much higher growth rates will be needed in order to help people out of poverty. Currently, GDP in Honduras is around 2,500 U.S. dollars per capita, and this amount is not expected to increase significantly in the future. Furthermore, not only is GDP per capita low, but Honduras also struggles with significant income inequality: While around 30 percent of the population continues to work in the agricultural sector, this sector only generates about 12.1 percent of total GDP.

As Honduras attempts to diversify its economy - for example, it recently began exporting apparel products in addition to traditional commodities such as coffee and bananas -, increasing exports could help reduce its trade deficit and provide a better financial base for the country. Reducing dependence on the United States for both exports and imports may also help. However, addressing income inequality and crime is of utmost importance on the path to improving the living and economic conditions of Hondurans.

In the following 4 chapters, you will quickly find the 37 most important statistics relating to "Honduras".

The most important key figures provide you with a compact summary of the topic of "Honduras" and take you straight to the corresponding statistics. 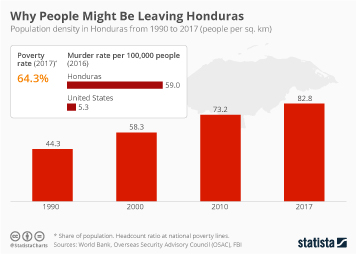