Published by
Amy Watson,
Oct 9, 2019
What started off as a series of books written by George R. R. Martin has now become a cultural phenomenon. Game of Thrones has taken the world by storm and ends its run as one of the most popular television shows of all time. The show’s seventh season, regularly drew in over 10 million viewers to HBO, with millions more watching the episodes illegally online across the world. The show also regularly cleaned up during awards season and was even nominated for two Golden Globes in 2017. In 2019 alone, the show was nominated for a total of 32 Primetime Emmy Awards, and ranks second in terms of overall Emmy wins.
As the show has grown, so has the production budget per episode. During season two, each episode cost an average of six million U.S. dollars to produce, but this figure jumped to 15 million U.S. dollars by season eight. The series is also known for its large, ensemble cast, although several characters have moved to the forefront of the action in later seasons. Despite his apparent death at the end of season five, Jon Snow occupied the screen for the longest time during season seven followed closely by Tyrion Lannister.

George R. R. Martin is well-known as being unafraid to kill off main characters, and this violence in the books translates to violence on screen. Whilst a mere 59 characters were killed in the first season, this number rocketed to 3,523 in the series’ final season. The location which characters would be wise to avoid is Winterfell, which is where 3,709 characters met their deaths, the majority of whom died at the hands of Arya Stark.

Over 30 percent of Americans consider themselves at least casual fans of the show as of 2019, but the series’ final season was met with disappointment among many of its supporters. Over a third of viewers stated that they did not like the series finale, with “poor writing” mentioned as one of the major reasons for their disappointment. While the show certainly serves as one of the most popular fantasy series of all time, nearly 40 percent of viewers state that they much prefer the shows earlier seasons to the later ones.

In the following 5 chapters, you will quickly find the 36 most important statistics relating to "Game of Thrones".

The most important key figures provide you with a compact summary of the topic of "Game of Thrones" and take you straight to the corresponding statistics. 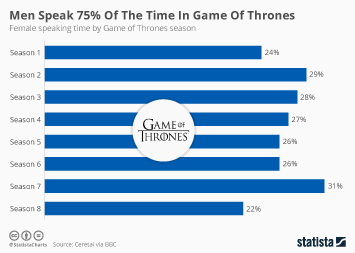 Men Speak 75% Of The Time In Game Of Thrones 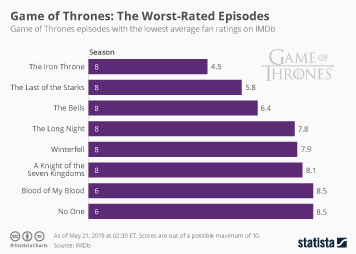 Game of Thrones: The Worst-Rated Episodes