Published by
Amna Puri-Mirza,
Feb 28, 2022
Halal is an Arabic term which translates literally to “permissible” and refers to a set of rules in Islam dictating permissible and forbidden activities, often involving food and drink. In order for meat to be considered halal, the animal must be slaughtered in a way that adheres to certain strict guidelines, or else it is deemed “haram” or unlawful.
The halal food market has massive potential for growth, and in many countries one can find such items as halal foie gras, halal frozen meals, and halal chicken nuggets to name a few. As Islam is the second largest religion in the world, the halal product market is expected to grow from 1.4 trillion U.S. dollars in 2017 to around 2.6 trillion by 2024, with the largest share of the market value coming from North America. Halal cosmetics are expected to reach 54.16 billion U.S. dollars in market value by 2022. Some of the biggest growth opportunities for the global halal market include branding halal food as healthy and producing organic halal food.

As the global market for halal foods grows, there will be increasing demand from countries that do not have the means to produce sufficient quantities of their own halal food. The leading importers of halal food in 2015 among OIC countries were Saudi Arabia, Malaysia, and United Arab Emirates, with one of the most popular imported foods being beef. Brazil was the top exporter of halal meat in that same year, followed by Australia and India.

The global region with the largest share of halal adherents was the Middle East and Africa where just under half the population follow a halal diet as of 2016. However, the country with the highest expenditure by Muslims on food and beverages was Indonesia in that same year.

In the following 5 chapters, you will quickly find the 20 most important statistics relating to "Global halal market ". 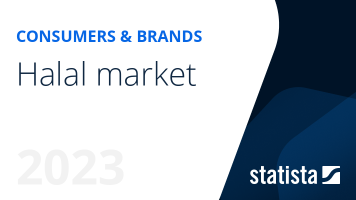 Food shopping behavior in the U.S.