Published by
Madhumitha Jaganmohan,
Sep 2, 2022
As a fast-growing economy, China faces multiple challenges regarding energy generation, particularly the population growth and economic pressure posed on energy demand. However, with this rapid increase in energy consumption coupled with the heavy reliance on coal, various environmental problems started to arise in China, with air pollution being the easiest to notice.

Green energy has been gaining much more attention in the last decade to cope with the deteriorating environment while sustaining economic growth. Currently, like many other countries that just started on the journey to low-emission, China's share of renewable energy in the whole energy mix is still relatively low. Crude coal is still the dominant source of energy in the country, which was also one of the culprits for the infamous air pollution. In light of public health and sustainable development, China has become a keen driver of the growth of renewable energy on a global level, especially as a leader in solar energy.

The dominance of solar power

China has the world's highest solar energy consumption share, much higher than other leading countries, such as the United States, Japan, and Germany. Solar power generation over the years has increased exponentially, reaching 330 TWh as of 2021. Wind power is the second most crucial renewable energy for China. From 2014 to 2021, the cumulative installed wind power capacity tripled to almost 282 gigawatts. Additionally, from 2004 to 2021, domestic hydropower consumption increased more than threefold to over 12 exajoules.

As a leading player in the solar markets in the world, the photovoltaic power generation sector has become much more of a profitable industry on its own than existing merely for environmental reasons in China. China has been transforming from a manufacturer to an innovator in the renewable energy industry, and is likely to keep influencing the market substantially in the future.

In the following 5 chapters, you will quickly find the 25 most important statistics relating to "Renewable energy China".

The most important key figures provide you with a compact summary of the topic of "Renewable energy China" and take you straight to the corresponding statistics. 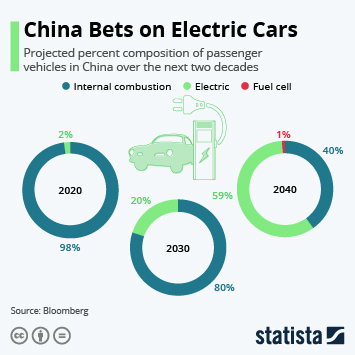 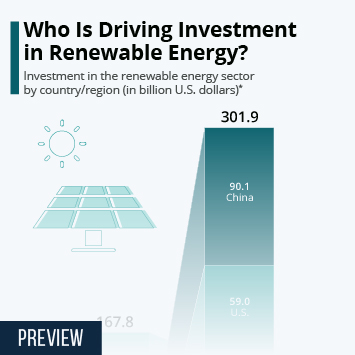 Who Is Driving Investment in Renewable Energy?