Published by C. Textor, Jan 25, 2022
Rapid industrial development and the dominance of economic growth in political considerations have taken their toll on the environment in China. Hazardous levels of water and air pollutants have become a daily phenomenon in the lives of the Chinese people. In addition, the country is frequently hit by natural disasters of various kinds. As of 2020, China ranked third among countries with the most natural disasters worldwide. Aftereffects of overexploitation and pollution not only become apparent in everyday lives, they also begin to have a serious impact on the economic situation of the country. In 2020, Anhui province alone had reported a regional economic loss of over 60 billion yuan due to natural disasters.

Probably the most prominent of China’s environmental issues is the country’s air pollution. Industry waste gas emissions put a strain on man and nature alike. In 2020, carbon dioxide emission from fossil fuel and industrial purposes in China reached nearly eleven billion metric tons. Carbon dioxide emissions have been constantly rising in China, the growing emission led by soaring amount of new vehicle registration and others only complicate the matter. In order to reduce exhaust gas emissions, the government has introduced specific reduction targets in the 12th five year plan and the progess of which were subsequently reported and further planned in the 13th five year plan.

China’s water reserves used to suffer heavily from industrial pollution, but the result of the efforts of China to improve environmental quality seemed to finally start revealing itself. As of 2021, over 80 percent of the surface water sampled across China was categorized as Grade III or above, which was almost drinkable quality.

Due to rising urgency, an industry has developed around environmental protection, attracting considerable investment. Together with government's effort, some effects are starting to reveal themselves. In terms of air pollution, which was the most concerning environmental issues according to Chinese citizens, air quality has been improving, with around 87 percent of days having a good or above quality in 2020. This develoment is reflected in the average PM2.5 air pollution levels in Beijing and Shanghai, which have improved considerably over recent years.

In the following 5 chapters, you will quickly find the 29 most important statistics relating to "Environmental quality in China".

The most important key figures provide you with a compact summary of the topic of "Environmental quality in China" and take you straight to the corresponding statistics. 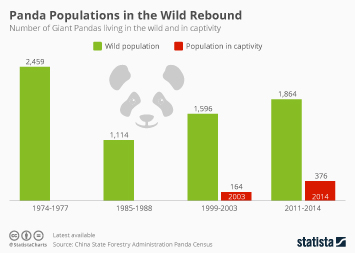 panda populations in the wild and in captivity 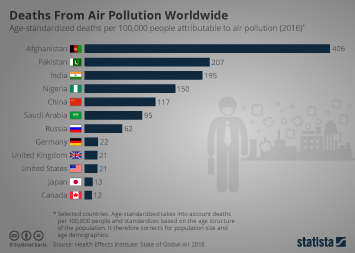