Published by Statista Research Department, Jan 11, 2023
Healthcare in Thailand is centrally managed by the Ministry of Public Health. All Thai citizens enjoy universal healthcare coverage through the Universal Coverage Scheme (UCS). The UCS, introduced in 2002, aimed to deliver healthcare coverage and benefits to the whole Thai population. It allows card holders to receive medical treatment in public hospitals for a fee of only 30 Thai baht. Though, funding this scheme has led to higher healthcare expenses for the government. Since 2010, the Thai government has increased the budget for the Universal Coverage Scheme, amounting to roughly 203 billion Thai Baht in 2021. However, the contribution of healthcare industry to the GDP in Thailand has been increasing since 2012.

The state of health in Thailand

Thailand has a long history of health development, and a well-developed healthcare system. People in Thailand have a higher life expectancy compared to other countries in Southeast Asia, amounting to approximately 77 years. Despite the developments in healthcare, there are still some continuing population health issues. Significant infectious diseases in Thailand include dengue fever, malaria, and tuberculosis. In terms of nutrition-related health issues, diabetes is prevalent in the country due to high sugar consumption, and the number of diabetic patients has gradually risen over the years, amounting to around 4.6 million in 2021. Cancer is also one of the most commonly-occurring diseases in Thailand. In 2020, there were around three thousand new cancer patients in Thailand, with females making up the majority of such patients. With regards to children’s health, Thailand has brought down the mortality rate for children under 5 years through its vaccination policies and medical checkups.

The central government in Thailand has funded the development of an extensive healthcare infrastructure outside the urban areas. Thailand’s healthcare system is driven by the area health (AH) mechanism, also known as health districts, totaling to 13 AHs. The AH mechanism, in which one area health covers three to six provinces, thus provides comprehensive healthcare to Thai people living in non-urban areas. The healthcare system is supported by its medical personnel. The number of doctors in Thailand amounted around 36.5 thousand, which could certainly be higher. In comparison, the number of professional nurses has been gradually increasing since 2015, amounting to around 176.3 thousand in that same year. Furthermore, the pharmaceutical market in Thailand is relatively large. Pharmacies are preferred among Thai people seeking for convenient medical remedies. Over-the-counter drugs held a good share of pharmaceutical market in Thailand, accounting for 20 percent of the total market.

In the following 6 chapters, you will quickly find the 33 most important statistics relating to "Health in Thailand". 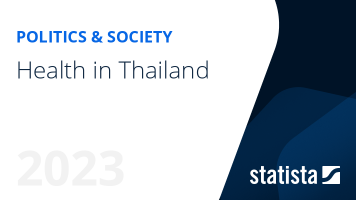 The most important key figures provide you with a compact summary of the topic of "Health in Thailand" and take you straight to the corresponding statistics.

State of health in India