Published by
Aaron O'Neill,
Apr 22, 2021
Thailand is located in Southeast Asia and borders a total of four countries. It has a population of about 69 million inhabitants, about half of which live in urban areas and cities, mostly in big metropolises like Bangkok or Nonthaburi City. Thailand's capital, Bangkok, also called Krung Thep among Thai people, has the highest population figures, with approximately 5.69 million people.
The Kingdom of Thailand, formally known as Siam until 1939, was established in the mid-14th century. Due to the fact that Thailand was the only country in Southeast Asia that was not colonized by another country, it has no independence day to celebrate. However, Thailand celebrates its king’s birthday as a national holiday, and this date changes depending on when a new king ascends to the throne. Until the death of King Bhumibol Adulyadej in 2016, it was celebrated on 28 August, and commemorated his birthday. From 2017, it is celebrated on December 5th, and commemorates the birthday of King Bhumibol Adulyadej's son, King Vajiralongkorn. Thailand is a constitutional monarchy and has 76 provinces. The official language spoken in the country is Thai.

Famous for its tropical warm climate and bordering the Andaman Sea, the country became one of the most visited tourist destinations: In 2014, it was the leading nation in the tourism sector worldwide), and its capital Bangkok was the most visited city in 2016, accommodating 21.47 million international overnight visitors.

Due to the high influx of visitors and the well-developed industry sector, Thailand’s economy should be quite stable or even growing steadily, but in fact, GDP growth has been yo-yo-ing over the last couple of years. It is however estimated to stabilize from now on. The services sector and the industry sector generate more than 91 percent of the country’s GDP nowadays. International trade plays an important role in the development of Thailand’s economy, thus, when it comes to trade, exports account for nearly 70 percent of the state GDP. Thailand's most important export partner are the United States, with a share of 11.4 percent of all exports. China is the state’s most important import partner, with a share of about 21.6 percent in imports,

In the following 5 chapters, you will quickly find the 50 most important statistics relating to "Thailand". 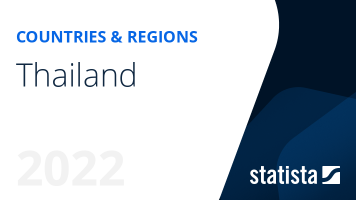 The most important key figures provide you with a compact summary of the topic of "Thailand" and take you straight to the corresponding statistics.

Gaming market in the Asia-Pacific region

Automotive industry in the Asia-Pacific region