Soft drinks have a long history in the beverage industry. Initially marketed as pharmaceutical products, soft drinks have evolved along with the taste and needs of consumers, so much so that in this day and age a person enjoying one of these drinks with their meal is a common sight.
In Spain, an average of 36.7 liters of soft drinks are consumed per person per year, with cola-flavored drinks being consumers’ top preference. Of the different varieties of Cola drinks available on the market, Spanish households prefer Diet Cola drinks over standard Cola with added sugars; as well as caffeinated over non-caffeinated. Soft drink consumers’ favorite brand is Coca-Cola, and this fact can be reflected on the turnover of the Spanish subsidiary Coca-Cola España, which ranked at the top of the soft drink market at almost three billion euros in 2018. This figure is more than double that of the two companies that followed: Schweppes and J García Carrión, which registered turnovers of 534.5 million euros and 532 million euros respectively during the same period.

Despite the fact that Spain, as many other countries, is experiencing an exceptional growth in consumer sales by means of e-commerce channels, soft drinks are still mostly purchased in brick-and-mortar shopping venues, with over 90 percent of the total sales in 2018. Most of these sales were performed in supermarkets, with about 74 percent of the share; and hypermarkets that held 17 percent of the sales of soft drinks in Spain as of the same year.

Eloise Trenda
Research Expert covering global food topics with a focus on the French, Spanish, and LATAM markets
Get in touch with us now
Published by Eloise Trenda, Aug 2, 2022

Spanish region with the highest consumption of soft drinks
Andalusia

Household consumption volume of soft drinks and fizzy water in Spain 2021, by region

Per capita consumption of orange sodas in Spain
2.99kg

Per capita consumption of soft drinks and fizzy water in Spain 2020, by type

Retail prices of soft drinks and fizzy water in Spain 2021, by type

Leading beverage brands by penetration rate in Spain in 2021 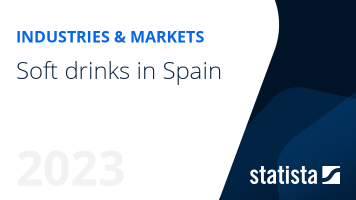 The most important key figures provide you with a compact summary of the topic of "Soft drinks in Spain" and take you straight to the corresponding statistics.