Published by
P. Smith,
Jan 12, 2022
It is thought that small clocks which could be worn easily, now known as watches, was first engineered in Germany. Whether or not that is true, Switzerland is better known today as the leader of the watchmaking scene. A true Swiss watch have been said to be some of the most reliable, attractive, well-crafted products. Swiss watchmaking has also withstood the test of time. The tradition has survived the invention of Quartz watches, digital watches, as well as smart watches. Today, Swiss watches can be seen as a luxury item, and many people buy them for their superior quality and status.

As of 2020, there more than 700 individual companies within the Swiss watchmaking industry. The majority of these watchmaking companies are located in Neuenberg, a Swiss canton. Nearly 200 Swiss watch companies operate in that canton alone. Unsurprisingly, Rolex is the brand with the largest market share of Swiss watches in the world. In 2020, Rolex accounted for nearly 25 percent of the entire market. Rolex is a luxury Swiss watch manufacturer located in Geneva, Switzerland.

Swatch is the largest Swiss watchmaking company. In 2019, Swatch held almost 30 percent of the market share of the Swiss watch market worldwide. The majority of Swatch’s revenue was generated by the sale of watches and jewelry. The remaining source of Swatch’s revenue came from the sale of electronic systems. Recently, however, the net income of the Swatch Group has fallen. In 2019, Swatch’s net income was approximately 533 million Swiss francs. This was a considerable decrease from the previous year, which was nearly twice the amount.

In the following 3 chapters, you will quickly find the 27 most important statistics relating to "Swiss watch industry". 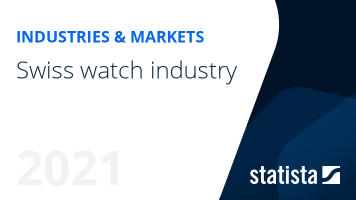 The most important key figures provide you with a compact summary of the topic of "Swiss watch industry" and take you straight to the corresponding statistics.