Published by Statista Research Department, Aug 8, 2022
Consumption of tobacco products rose over the past century, turning an addictive habit into a major global industry that generates billions of dollars for various companies worldwide each year. However, as the detrimental effects of smoking on health became more well-known and widespread, public health strategies have risen to increase awareness of the risks of smoking and to decrease tobacco use. Smoking is now seen as an epidemic, as both smoking and exposure to secondhand smoke contribute to a massive burden on health, increasing the risk of various types of cancers, respiratory and cardiovascular diseases, and many other health issues. Furthermore, smoking is one of the leading risk factors for death, causing over seven million deaths worldwide in 2019.

Tobacco use around the world

Around the world, use of tobacco products and smoking vary in each country and among different demographic groups. The countries with the highest prevalence of daily smokers are Kiribati, Nauru, and Papua New Guinea, where 35 percent or more of the populations smoke. The countries with the lowest prevalence of daily smokers include Panama, Ghana, and Nigeria. Men smoke at higher rates than women in most countries around the world, but the prevalence of smoking has been declining for both men women and is expected to continue to decrease in the coming years. However, this drop in smoking rates is seen mostly in high income countries, as low- and middle-income countries still have high numbers of smokers.

Health concerns related to smoking include various types of cancers, immune disorders, and a wide range of health issues such as eye disease, all of which can add up to a higher risk of disability and earlier death. Lung cancer, which is known to be directly caused by smoking, is the deadliest type of cancer, leading to almost 1.8 million deaths worldwide in 2020. Furthermore, both smoking and exposure to secondhand smoke can cause or worsen respiratory conditions such as asthma, COPD, and emphysema. Exposure to smoke also leads to a higher risk of cardiovascular disease among smokers and nonsmokers, which is concerning as ischemic heart disease and stroke are leading causes of death worldwide. However, once a person quits smoking, improvements in health begin immediately and continue to increase over time.

There are different strategies and policies used to control tobacco use, including widespread health campaigns, taxation, smoke-free laws, and bans on the consumption and advertising of tobacco products. One strategy proven to be effective is making tobacco less affordable, which is more often used in high income countries than low income countries. Additionally, raising awareness of the health risks associated with smoking is key in cessation programs, which is often done through placing alarming images and warning labels on tobacco products. Among high- and middle-income countries, covering costs for nicotine replacement therapy and cessation services are also key facets in tobacco dependence treatments.

In the following 7 chapters, you will quickly find the 39 most important statistics relating to "Smoking worldwide". 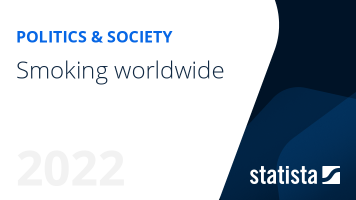 The most important key figures provide you with a compact summary of the topic of "Smoking worldwide" and take you straight to the corresponding statistics.

Tobacco Products in the U.S. 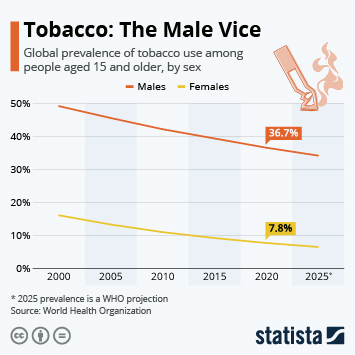 Prevalence of tobacco use by gender