Semiconductors in Japan - statistics and facts

Published by Statista Research Department, May 31, 2022
Semiconductors play an increasingly important role for economies around the world. While Japan has long operated as a manufacturer and major exporter of semiconductor equipment, the recent global chip shortage showed that the country has to increase its efforts to secure supply chains and become more self-reliant in production processes. Since semiconductors are used in a wide variety of important technological products, such as smartphones, PCs, and automobiles, the industry is considered essential for economic success and even has become an issue of national security in Japan. Although the country accounted for more than half of the global chip production in the late 1980s, it was not able to maintain its pre-eminent position due to a variety of factors, which include the relocation of facilities to overseas production sites, the rise of other competitors, such as Taiwan and South Korea, a focus on vertically integrated production models, and a lack of public funding. Despite these circumstances, Japan continues to be a major player on the global stage and has formulated ambitious plans to improve its position in the coming years.

The current state of the semiconductor industry

The revenue of the Japanese semiconductor industry amounted to about 36.5 billion U.S. dollars in 2020 and was expected to grow further in the future. Japan’s largest contribution to the global semiconductor industry in terms of added value lies in the area of manufacturing equipment. As worldwide investments in manufacturing capacities increase, the Japanese manufacturing equipment industry is expected to profit from the accompanying demand for machinery. Although Japan lacks high-end domestic production capabilities, it is home to many prominent technology companies that engage in the semiconductor business, such as Kioxia, Tokyo Electron, Renesas Electronics, Sony Semiconductor Solutions, Rohm, and Toshiba. Japan is also one of the leading countries with regard to the spending on semiconductor research and development (R&D). Statistics on the production value of discrete semiconductors and integrated circuits (ICs) show that optoelectronic devices and transistors are leading categories among discrete semiconductors, while memory ICs play a larger role than logic ICs in the case of metal oxide semiconductor (MOS) ICs.

As a consequence of the increased competition in the market and in light of recent supply chain disruptions, both the government and the private sector have made efforts to revive and improve domestic production capabilities. In June 2021, the Ministry of Economy, Trade and Industry (METI) published a strategy paper that emphasized the importance of semiconductors for the economy and economic security. In November of the same year, the Japanese government decided to support the semiconductor industry with a 774-billion-yen package, about half of which is supposed to be used for the construction of a new foundry by Taiwan Semiconductor Manufacturing Co. (TSMC) in Kumamoto Prefecture. In addition, Japan aims to become a world leader in power semiconductors, which are seen as a key in reducing energy consumption. In this regard, a project involving the cooperation of Rohm, Toshiba, and Denso is led by the New Energy and Industrial Technology Development Organization (NEDO). Among other aims, the project seeks to halve the energy loss of power management devices by 2030.

In the following 6 chapters, you will quickly find the 36 most important statistics relating to "Semiconductors in Japan". 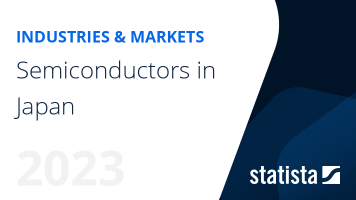 The most important key figures provide you with a compact summary of the topic of "Semiconductors in Japan" and take you straight to the corresponding statistics.

IT industry in Japan

Science and research in Japan