The software industry involves the development, production, use, and maintenance of computer software. Since the 1950s, when the market first started developing, it has undergone major changes. Today, the industry includes productivity software, enterprise software, application development software, and system infrastructure software and is used for different business models, either on-premises or cloud-based. In Latin America, the software industry took off later as a result of the region being excluded from typical software imports. However, the recent influx of American and European investments, as well as the region’s high-quality IT workforce, are making it a promising hub for software development. In 2021, the Latin American software industry recorded a revenue of over 22 billion U.S. dollars and counted around 600 independent software vendors (ISVs).

In Latin America, Brazil leads the IT market. Focusing on software, the Brazilian market generated over 11 billion U.S. dollars in revenue in 2021, with enterprise software being the most profitable segment. The enterprise software segment consists of several sub-segments, of which customer relationship management and enterprise resource planning recorded the highest revenues in 2021. However, the market appears to be developing unevenly across the country, with over 60 percent of the Brazilian software market was concentrated in the South-East region in 2021.

In recent years, the number of IT service and software companies in Brazil has rapidly grown. Particularly, in 2021, the Portuguese-speaking country counted around 7,600 software development and production companies and over 9,300 software distribution and marketing firms. The most famous Brazilian software company is TOTVs, founded in São Paulo in 1983 and later operating offices in the United States, Portugal, and other Latin American countries. In 2021, around 133,000 people were employed in the Brazilian software market, mostly working in São Paulo and with an average wage of 4,461 Brazilian reals - roughly 863 U.S. dollars. However, forecasts suggest that the IT and software industry will need additional new talent in the coming years, totaling around 150,000 by 2025.

As one of the most prominent software applications, in 2021, Brazil launched a new artificial intelligence (AI) national strategy, seeking to balance research and development with conscious and ethical use. In the coming years, the Brazilian AI and ML market size, which amounted to just under 400 million U.S. dollars in 2021, is forecast to grow. Such growth is due also to the funding companies and startups – most of which are based in the South-East,– are receiving. For example, in 2021, the São Paulo-based company Quicko received funding of around 29 million U.S. dollars, while STILINGUE received around 18 million U.S. dollars.
This text provides general information. Statista assumes no liability for the information given being complete or correct. Due to varying update cycles, statistics can display more up-to-date data than referenced in the text. 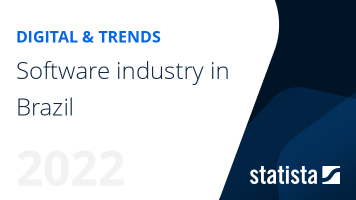 The most important key figures provide you with a compact summary of the topic of "Software industry in Brazil" and take you straight to the corresponding statistics.