As of 2022, Brazil still is the largest market of WhatsApp outside of Asia: the instant messaging app was estimated to have around 147.37 million users in the country in 2022, accounting for more than 54 percent of its user base in the entire South American subcontinent. The app is by far the most used social media platform in Brazil and is virtually present on almost every smartphone in the country. More than 96 percent of the Brazilian population is an active user of the messenger, while 35 percent appoint it as their favorite social media platform. But WhatsApp means much more than just messaging in Brazil.

’Zap-zap’ and the Brazilian lifestyle

Popular enough to be nicknamed ‘zap-zap’, the messenger app is used by more than 90 percent of smartphone owners in Brazil to exchange text messages and by 83 percent to exchange images and voice messages. Its usage has also expanded beyond personal communication: although the app itself quickly turned into a channel for direct communication with brands and companies, the release of its business spin-off in 2019 brought an alternative for small and medium-sized companies to interact with customers, thus creating the demand for the WhatsApp Pay service to operate with financial institutions like banks, credit cards, and cooperatives.

Challenges to the top position…

WhatsApp is the dominant messaging app in Brazil: besides being installed on almost every smartphone in Brazil, and the most frequent app on the home screens of these devices and it’s also the second most used app by children. Despite this unparalleled popularity, Russian competitor app Telegram has experienced a major increase over the last years, now being present in around 60 percent of Brazilians’ smartphones in 2022, challenging the Meta-owned apps along with Signal.

…and back in the eye of the hurricane

The popularity of WhatsApp in Brazil also comes with high responsibilities and political price. As an expansive and versatile tool of communication, the app become the second most-used social media for news consumption in Brazil, especially among users older than 45 years. Still, 62 percent of Brazilians appointed the messenger as a place where they claimed to have found fake news. As if these were not enough challenges, more than half of respondents of a March 2022 survey in Brazil said that messaging apps should be suspended if they disobey a court order to avoid the spread of fake news, while around 81 percent of them agreed that social media platforms and messaging apps should remove fake news content. Furthermore, the polarized political atmosphere in Brazil made social media users stop talking about politics on these platforms, while only eight percent of people claimed to use WhatsApp as their main social media platform for political information.

Despite all of this, WhatsApp plays a central in the country’s political discussion and communication, especially during the 2018 general elections, with the example of the extensive usage of bots supporting then-elected president Jair Bolsonaro in a campaign against his opponent Lula and the Worker’s Party. The impact of the app on the country’s politics led to a cooperation between the Brazilian Supreme Electoral Court and WhatsApp for the municipal elections in 2020 will also be replicated for the Brazilian general elections in October 2022 that will choose who occupies the highest political chair in the country.
This text provides general information. Statista assumes no liability for the information given being complete or correct. Due to varying update cycles, statistics can display more up-to-date data than referenced in the text.

Share of smartphone owners in Brazil who use Telegram
60%

Share of smartphone owners in Brazil who use Signal
12% 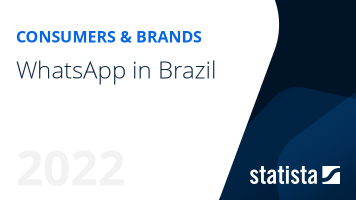 The most important key figures provide you with a compact summary of the topic of "WhatsApp in Brazil" and take you straight to the corresponding statistics.