If there was a prize for boldness in the video game industry, Nintendo would certainly be a serial winner. After failing miserably to replicate the success of the motion-controlled Wii with the Wii U that was launched in 2012 and discontinued five disappointing years later, the Japanese company could have reverted to a proven formula with its next console. Instead, Nintendo doubled down on one of the Wii U’s standout features, i.e. a gamepad with a display, and turned its next console into a full-fledged hybrid between home and handheld console. And to great success!

As our chart shows, Nintendo has now sold more than 111 million Switch systems, putting the hybrid console ahead of all its famous predecessors. It only took the Switch five years to become the most successful console in Nintendo's long history, an achievement that few would have thought possible in the wake of the Wii U disaster.

Despite the Switch's success, some clouds are gathering over the Mushroom Kingdom. In the most recent quarter, Nintendo saw both hardware and software sales decline, with the former at least partially attributed to the global semiconductor shortage, but the latter indicating weakness in the company's software release line-up.

Nintendo is not alone in navigating choppy waters at the moment, however. Following the pandemic boom, the entire video game industry is currently facing a slowdown, as many potential console buyers did make a purchase sometime during the past two and a half years. Moreover, with Covid concerns easing and more leisure activities back on the menu, gaming is naturally facing more competition, which has to affect consumer spending on gaming content and hardware eventually. 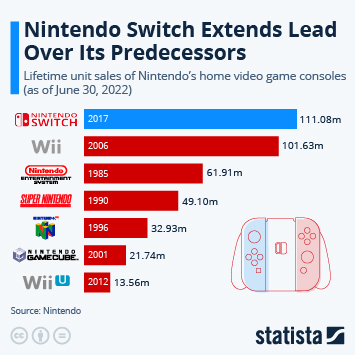