88.9k
The UK government announced its plan today to help tackle obesity, with a stated aim of reducing the number of calories in certain foods by 20 percent over the next five years. As our infographic shows, conservative estimates point to the potential prevention of 35,370 premature deaths over a 25 year period as a direct result of the change. With an eye to the NHS and social care, a combined saving of over £9 billion would also be expected.

Obesity is a serious problem in the UK, and according to the Public Health England (PHE) report 'Calorie reduction: The scope and ambition for action', almost a quarter (22.6 percent) of 4 to 5 year olds were obese or overweight in 2016/17. This share increases greatly when looking at 10 to 11 year olds, of which over a third (34.2 percent) fall into these two categories. By working with the food industry to reduce the calories in foods such as ready meals, pizza, pies and crisps, the government hopes to halt and reverse this growing problem.

Core to the plan is either the reformulation of products or simply a reduction in portion size. The overall scale of the task though, is mammoth. As the government report states, to achieve the goal, cooperation is required from retailers, manufacturers, restaurants, pubs, cafes, takeaway and delivery services. PHE will work in a number of ways the make this happen, including advising the government if progress is not being made in any area and close consultation with company stakeholders. 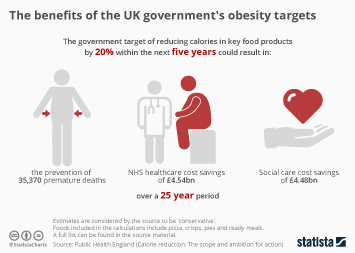 This chart shows the potential benefits of the UK governments plan to reduce calories in key foods by 20 percent.

Health Conditions in the EU