40k
57k
41k
9.6k
According to the latest figures (2016), there are an estimated 1.6 billion air conditioning units in the world. These are mainly concentrated in the United States, China and Japan/South Korea with 374, 569 and 207 million units respectively. This landscape is due to change dramatically over the next 30 years though. Projections by the International Energy Agency (IEA) predict a 244 percent increase in the number of AC units in the world from 2016 to 2050.

The U.S. market is already mature, with 90 percent of households having AC. Similarly, 91 percent of Japanese homes have one. As such, the growth rates to 2050 are expected to be 45 percent for the U.S. and only 29 percent for Japan (and South Korea). Where the major growth over the next few decades is forecast to come from is India. A massive increase from 27 million units to 1.1 billion - a 4,206 percent growth rate - is predicted up until 2050.

While this is great for air conditioner manufacturers and the well being of those living in hot climates, the increased energy demand that this will cause is potentially a massive problem for the world. Fatih Birol, Executive Director of the IEA warns that: "Growing demand for air conditioners is one of the most critical blind spots in today’s energy debate". He adds that an essential and relatively simple step is for governments to set higher efficiency standards for cooling. As our infographic shows, in a baseline scenario, energy demand due to air conditioning is expected to reach 6,205 TWh by 2050. The IEA forecasts that with policies in place that double average AC efficiency, the global demand could be just 3,407 TWh. 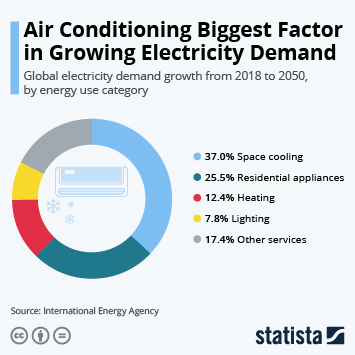 This chart shows the number of AC units worldwide and the corresponding energy demand from 2016 to 2050.