88.9k
10 years ago, in early August 2008, the website Airbedandbreakfast.com went online, marking the birth of Airbnb. Back then the three founders, Brian Cheky, Joe Gebbia and Nathan Blecharczyk wanted to help short-term travelers find affordable accommodation and provide renters with an opportunity to make an extra buck by renting out spare rooms or even just the namesake airbed on the floor. Little did they know that 10 years later their little venture would be one of the hottest private companies in the world, valued at nearly $30 billion. Over the years, Airbnb has developed into much more than what it was originally meant to be. These days you can rent millions of houses, apartments and rooms on the platform. For many young travelers is has become the favorite if not the only way to find accommodation when travelling.

Luckily for Airbnb, its rise coincided with a steep increase in city tourism. In cities such as London, Paris or New York, where hotel rooms are often hard to find and/or expensive, Airbnb has become an affordable and popular way to experience cities in a less touristy way. While the platform has been opposed by the hotel industry pretty much from the start, it has also drawn a fair amount of criticism from residents of popular city trip destinations for exacerbating the shortage of affordable housing in many areas. A criticism that doesn’t seem entirely unfair, considering the number of objects listed in some cities. The following chart, based on data from AirDNA, shows which cities are particularly popular on Airbnb. 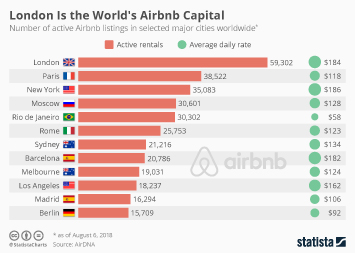