53k
74.6k
87k
88.9k
Iran’s central bank has proposed slashing four zeros from its beleaguered currency, the rial. According to reporting by Reuters, a bill was presented to the government over the weekend but has yet to be passed. While there has been talk of slashing the zeros for some time, 2019 could be the year it’s finally happening. The rial lost more than 60 percent of its value during 2018 and is currently available at a rate of approximately 110,000 rial to the dollar on the country’s flourishing currency black market.

Disruptions of foreign trade due to the renewed U.S. sanctions against the country are the reason for the ongoing economic problems that might soon be masked by the purely cosmetic zero slashing. While the practice improves the readability of bank notes, it does not combat the hyperinflation commonly behind the devaluation and subsequent redenomination of currencies.

Removing only four zeros is still a far cry from the most extreme forms of zero slashing in currency history. The country of Zimbabwe made headlines in 2008 and 2009 when the government got rid of ten and 12 zeros respectively. A 100 trillion note (100,000,000,000,000) in the local currency of Zimbabwean dollars had been issued shortly before the second round of redenomination. Since then, the currency has been largely abandoned in favor of foreign tender like the U.S. dollar or the South African rand. 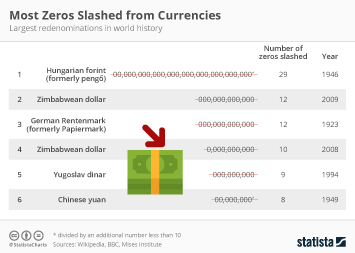 This chart shows most zeros slashed in a currency redenomination.