As the coronavirus rages on in the United States, forcing several states to close down businesses and public life once again, the National Restaurant Association rang the alarm bell last week. In a letter to Congressional leadership, the organization urged lawmakers to reach an agreement on a second coronavirus relief package and help protect the restaurant industry, which has been “in economic free fall” for nearly nine months now.

In the letter addressed to Nancy Pelosi, Mitch McConnell, Kevin McCarthy and Chuck Schumer, the National Restaurant Association cites the results of its latest survey of 6,000 restaurant operators, showing that 87 percent of full-service restaurants reported an average 36 percent drop in sales and that 10,000 restaurants have closed across the nation in the past three months alone.

"What these findings make clear is that more than 500,000 restaurants of every business type—franchise, chain, and independent—are in an economic free fall," said Sean Kennedy, executive vice president for Public Affairs in the letter. "And for every month that passes without a solution from Congress, thousands more restaurants will close their doors for good."

As the following chart shows, the food services industry has been hit incredibly hard by the pandemic, losing $130 billion in sales between March and October as a result of mandated closures and capacity limits. By the end of November, the industry had lost 2.1 million jobs compared to its pre-pandemic state and as of December, an estimated 110,000 restaurants were closed either permanently or long-term due to the crisis. 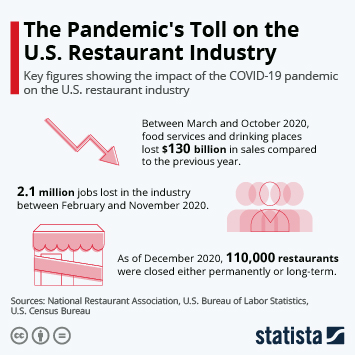 This chart shows key figures illustrating the impact of the COVID-19 pandemic on the U.S. restaurant industry.