50 years ago, on March 30, 1971, a store selling freshly roasted coffee beans and coffee equipment opened in Seattle’s Pike Place Market. And if anyone had predicted back then that this little specialty store would lay the groundwork for a billion-dollar empire, operating tens of thousands of coffee stores around the world, that person would at the very least have been diagnosed with a severe caffeine overdose. And yet, that’s exactly what happened.

Over the past five decades, Starbucks has evolved from said little coffee store into a chain of almost 33,000 company-operated and licensed stores, sprawled across more than 80 countries. With a market capitalization of $128 billion, the Starbucks Corporation, still headquartered in Seattle, has grown into the second largest quick-service restaurant chain in the world, trailing only McDonald’s in terms of sales, market capitalization and global brand appeal.

Having pivoted from selling coffee beans and equipment to brewed coffee and espresso beverages in the 1980s, Starbucks quickly expanded, opening its first store outside the United States in Vancouver, Canada in 1987. By the time of the company’s IPO in 1992, the store count had risen past the 100-mark and showed no signs of slowing down. From 1,000 stores in 1996 to 10,000 stores in 2005, Starbucks passed milestone after milestone adding more and more countries to its blossoming licensing business. By the end of 2020, the company operated 16,742 stores in eight countries, while 16,196 licensed stores were operated in 81 countries. 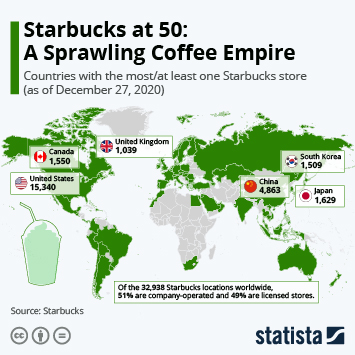 This chart shows the countries with at least one Starbucks store at the end of 2020.