Published by Jan Conway, Dec 13, 2021
The term “spirits” refers to an alcoholic beverage that has been distilled, contains no added sugar, and has at least 20 percent alcohol by volume. The term is derived from the medieval practice of alchemy and refers to the essential liquid element obtained from a substance through distillation, the “spirit” of the substance, so to speak. Popular spirits include whiskey, rum, vodka, tequila, and gin, among others.

Johnnie Walker and Jack Daniel's are Scotch whisky and Tennessee whiskey, respectively, their names reflecting their place of origin. In 2020, Jack Daniel's American whiskey had 5.2 million case sales in the U.S., a decrease from the previous year. The brand's share of the straight whisky market in the U.S. has been diminishing over the last decade, with a share of 19.1 percent in 2020, down from 29.7 in 2011. Johnnie Walker sold 14.1 million 9 liter cases of whisky in 2020 and was ranked tenth among the most valuable spirits brands worldwide in that year.

Captain Morgan is a popular brand of rum owned by British conglomerate Diageo, though the product originates in Jamaica. The brand is recognized by its trademark image of a pirate captain standing triumphantly over a barrel of rum. In 2020, the brand sold 11.9 million 9 liter cases of their rum worldwide. Bacardi Limited is also known for its signature white rum, though the family-owned company now produces more than 200 brands of alcohol. The Bacardi brand was the most valuable rum brand worldwide with a value of 3.2 billion U.S. dollars. Sales volume stayed mostly the same for the brand in 2020, reaching 17.7 million cases sold.

In the United States, where vodka is the leading spirits category, Tito's Handmade vodka was the leading brand with a sales volume of over one million cases. Tito's Handmade is a standout in the category as an American made vodka. Smirnoff, another brand like Captain Morgan owned by Diageo, was the second best selling vodka. On the other hand, in the global vodka market, Smirnoff was, by far, the best selling brand.

Ginebra San Miguel, owned by a company of the same name headquartered in the Philippines, is the leading gin brand worldwide, with a sales volume of 31.2 million 9 liter cases in 2020. This was more than four times the volume of Gordon's gin, the next best selling brand. In the United States, Seagram's had the greatest market share at 16 percent. Consumption of gin in the United States has been declining for years, but 2020 saw an uptick in sales volume.

Patron, owned by the Patron Spirits Company, was the leading tequila brand worldwide, with a sales volume in excess of three million 9 liter cases. Patron's volume was nearly double that of Don Julio, the next best selling tequila brand. In the United States, this relationship is reversed with Jose Cuervo selling nearly double the volume of Patron. Like cognac in France, tequila is a designation of origin product exclusive to Mexico. Mexico further limits the regions which may create the spirit.

In the following 3 chapters, you will quickly find the 20 most important statistics relating to "Spirits Brands". 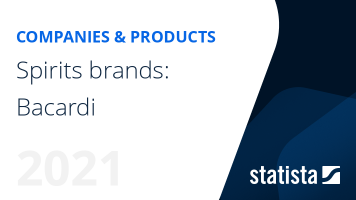 The most important key figures provide you with a compact summary of the topic of "Spirits Brands" and take you straight to the corresponding statistics.

Rum market in the United States

Cognac market in the United States