Published by C. Textor, May 6, 2022
The isle of Taiwan is located in the Pacific Ocean, 130 kilometers off the southeast coast of mainland China. Taiwan has a total population of around 23.4 million people, which is spread across a total land area of approximately 36,200 square kilometers. The population is aging rapidly due to low birth rates, and population growth has ceased in 2020, with natural population growth and net migration both turning negative that year.

Taiwan has a developed market economy. The gross national product (GNP) of Taiwan demonstrates that its economy has been growing steadily in the past, with growth rates ranging slightly above three percent on average over the last decade. Even during the global spread of the coronavirus pandemic in 2020, Taiwan was able to maintain economic growth and was very successful in containing the negative effects of the pandemic. Electronics, petroleum refining, and chemicals are among major domestic industries.

Taiwan’s economy is well known for its advanced electronics industry. The island has been an important producer of electronic equipment since the 1990s and has become an integral part in global value chains. Taiwan has developed a significant semiconductor industry with a market share in global IC fabrication of 77 percent in 2020. Although manufacturing is still very important for the island’s economy, today around two thirds of domestic values generated originate in service activities and nearly 60 percent of the workforce are employed in the service sector.

Taiwan has a strong trading tradition. Foreign trade has been the engine of Taiwan’s economic growth during the past few decades. In 2021, Taiwan denoted a merchandise trade surplus of about 65.4 billion U.S. dollars. Among its main trade partners are mainland China, Hong Kong, and the United States. Taiwan positions itself as a gateway to mainland China and Asia Pacific. Geographically, it finds itself between the world’s second largest economy, China, and the third largest, Japan.

In the following 6 chapters, you will quickly find the 38 most important statistics relating to "Taiwan".

The most important key figures provide you with a compact summary of the topic of "Taiwan" and take you straight to the corresponding statistics. 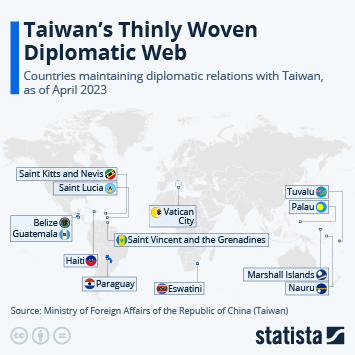 Countries with diplomatic relations with Taiwan 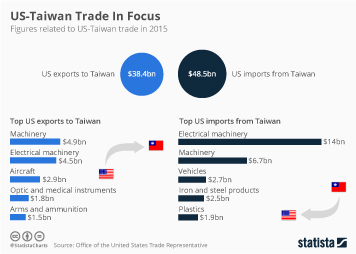