One of the most common sights on social and mobile messaging platforms is users sharing content with one another, and the sheer amount of links exchanged and posts shared across the world is so great that it is impossible to measure. We are living in the Information Age where content from numerous sources can be shared instantly. In a 2019 internet minute, global online users sent over 41.6 million mobile messages and 2.1 million snaps, exemplifying digital users’ constant need to communicate and share. Market leader Facebook has reached 2.4 billion monthly active users, while its photo- and video-sharing app Instagram has over one billion monthly active accounts. Reddit is a web traffic powerhouse: in April 2019 the online forum recorded almost 1.6 billion visits, making it one of the most-visited websites online.
Social sharing refers to the act of spreading content on a social media platform to one’s peers, groups, or chosen individuals. Businesses can use social sharing to generate brand awareness, inform consumers of promotions, and encourage their existing followers to share content.

Online content sharing also allows people to support causes or issues they believe in. A 2018 survey found that 45 percent of respondents stated that they have shared an opinion piece they agreed with on social media. Furthermore, social content sharing is also common to spread all kinds of information – celebrity news, global events and small-town happenings that have been picked up through digital media and spread internationally. However, online users do not only share articles and pictures – video content, especially short-form video, has rapidly grown in popularity with social sharers as watching videos on social networks such as Facebook or Instagram is now part of everyday social media usage. With approximately 1.6 billion video views in March 2019, LADbible was ranked first among the most watched Facebook video publishers. There are also various social apps for creating short-form video, the most popular being TikTok, a Chinese app focusing on comedy and lip-synching content which is widely popular with Generation Z users.

Despite its ability to increase the digital presence of businesses, one of the main motivations for social sharing is to connect and keep contact with others. Many TV and sporting events draw audiences beyond the TV screen: a significant portion of online users live-tweet or post Instagram Stories about what they are currently watching. A key example is the 2018 PyeongChang Winter Olympics, which generated over 103 million tweets and 33.6 billion impressions on Twitter. Many online sports fans often cannot wait until the obligatory post-match analysis stage to pass comment on an event and discuss developments as they happen – according to Twitter, the 2019 FIFA Women’s World Cup generated most of its social buzz during (and not after) the matches. All signs point towards the 2020 Tokyo Summer Olympics also being hyper-present on social, particularly as Olympic federations are starting to step up their game on various social platforms by engaging audiences through on- and off-season posts to keep people interested. Apart from international sporting events, there are also other types of content that draw regular online conversation and opinion sharing, most notably U.S. reality TV shows ranging from The Bachelor to RuPaul’s Drag Race.
This text provides general information. Statista assumes no liability for the information given being complete or correct. Due to varying update cycles, statistics can display more up-to-date data than referenced in the text.
Published by S. Dixon, Feb 8, 2022

Share of U.S. adults posting about family on social networks in 2016
34%

3rd leading online publisher as of June 2016, based on global shares per article
ted.com 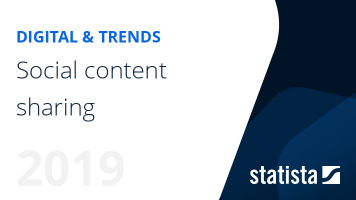 The most important key figures provide you with a compact summary of the topic of "Social sharing" and take you straight to the corresponding statistics.