Published by L. Ceci, Dec 9, 2021
With the wide availability of high-speed mobile internet and the ever-growing digital content landscape, it comes as no surprise that mobile video viewing has become increasingly popular in the United States. According to a 2020 survey, 43 percent of respondents stated that they watched video content via mobile, compared to 52 percent of respondents who said the same about watching video on a computer, a more established device for online video consumption. On average, U.S. adults spent 15 minutes per day accessing video apps on a smartphone, which although more than via computer is hardly remarkable compared to how much time they spend with live or time-shifted TV (almost four and a half hours per day).
There is a plethora of video content available to mobile video audiences in the United States. Apart from Google’s go-to video platform YouTube, most streaming services like Netflix, Hulu, or Amazon Prime Video have also launched mobile apps to enable their subscribers to watch shows and movies on the go. However, according to a survey of users in the United States and Canada, smartphone viewership was more common when consuming content from advertising-based video on-demand services than for subscription-based services.

In 2021, Disney+ was the highest-grossing streaming mobile app in the United States, with approximately 160 million U.S. dollars generated from users in the country between the first and the third quarter of 2021. HBO Max, which was firstly launched in the United States in May 2020, amassed 43 million installs of its mobile app in its first year, surpassing popular services like Disney+ and Netflix. By the end of 2021, HBO Max app was confirmed to be the fastest-growing mobile streaming service in the United States, followed by Baidu-owned Chinese streaming service iQiYi which recorded a 128 percent growth in monthly active users between the first and the third quarter of 2021. In the same period, when it comes to traditional TV network streaming apps, Showtime Anytime presented more than 130 percent growth in monthly active users. The app, originally launched in 2010, gives on-the-go access to subscription television network Showtime, which features series and movie libraries as well as sports events in its programming. As 17 percent of Americans reported watching or streaming sports events several times per week, it does not come as a surprise that mobile streaming of sports events is growing with mobile video popularity. In 2021, Spanish language channel TUDN was the fasted growing sports streaming app in the U.S., followed by the app for cable network Tennis Channel, and London-based DAZN.

Despite the relevance of on-demand video services via mobile, there is also another emerging player that has gained traction over the past years: mobile social video. Be it professionally produced video content posted by creators on TikTok or snaps shared with friends on Snapchat – social is mobile and many mobile-first social platforms have become synonymous with extensive video content consumption and sharing among friends and followers. Despite being a relative newcomer, mobile-first video social app TikTok has already proven stickiness: with 54 percent of adults in the United States accessing the platform multiple times per day, TikTok has become almost as popular as YouTube. While the number of Gen Z users on TikTok is expected to reach almost 50 million in 2025, photo and video sharing platform Instagram will experience slower growth. In 2021, the popular social network, which pivoted towards promoting video content in June 2021, saw its weekly usage among teenagers in the U.S. decrease in 2021 when compared to the previous year.

Mobile video ad spending has overtaken desktop video ad spending in the United States, and it is projected to reach approximately 54 billion U.S. dollars in 2025. In the first half of 2021, digital video ad views on mobile accounted for approximately 13 percent of all digital video ad views, up by more than 60 percent year-over-year. Looking at mobile ads from the consumer perspective, in-app video ads appeared to be as popular as banner ads, with 18 percent of respondents to a 2021 survey reporting to prefer video ads.

In the following 7 chapters, you will quickly find the 52 most important statistics relating to "Mobile video in the United States".

The most important key figures provide you with a compact summary of the topic of "Mobile video in the United States" and take you straight to the corresponding statistics.

Streaming in the U.S. 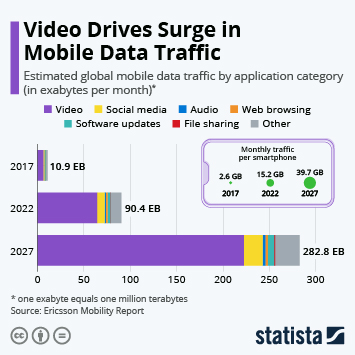