Published by Statista Research Department, Nov 22, 2022
An ad blocker is a program or software designed to remove or change advertisements during a user’s web browsing experience. As the online advertising landscape has become more ubiquitous than ever and global spending on digital advertising continues its upward curve, ad blockers have become indispensable digital tools for millions of internet users worldwide. In late 2019, the number of ad block users worldwide stood at 763 million, but while ad blocking services are particularly popular in certain regions, consumer adoption can vary, depending on online usage habits, technologies, or a country’s digital infrastructure. In the United States, the leading digital advertising market worldwide, awareness of ad blocking tools has never been higher.

According to the latest estimates, the ad blocking user penetration rate in the United States stood at approximately 26 percent in 2020, indicating that roughly 73 million internet users had installed some form of ad blocking software, plugin, or browser on their web-enabled devices that year. While awareness of these services lies at almost 90 percent, the number of internet users actively leveraging the technology has stagnated in recent years following visible changes in online user behavior. The switch from desktop to mobile has arguably had one of the most significant impacts on ad block usage: As internet users increasingly browse the web via mobile devices, desktop ad block usage rates in the U.S. and many other parts of the world are dropping, albeit at varying speeds. While mobile ad blocking adoption is still at a nascent stage in the U.S., the global number of mobile ad blocking browser users is rapidly increasing.

A 2020 survey on internet users' attitudes towards digital advertising revealed that almost 50 percent of U.S. online users viewed ads on websites negatively. While many users accept online ads in return for free content, irrelevant and intrusive ads are still considered annoying by numerous consumers. It therefore comes as no surprise that a majority of U.S. internet users listed better manageability of websites without banners as the leading reasons for using ad blocking in 2020. For marketers, this sentiment and ad blockers' overall use has led to considerable loss of advertising revenue over the past few years. As a result, an increasing number of U.S. publishers now employ ad block monetization strategies such as Acceptible Ads, a whitelisting program that turns ad blockers into ad filters and allows publishers to display non-intrusive and relevant ad content to ad blocking users. In 2020, Acceptable Ads reached around 200 million internet users worldwide.

In the following 5 chapters, you will quickly find the 27 most important statistics relating to "Ad blocking in the U.S.". 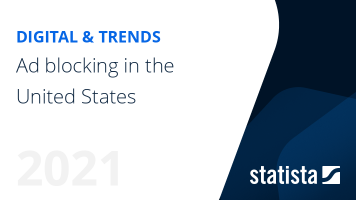 The most important key figures provide you with a compact summary of the topic of "Ad blocking in the U.S." and take you straight to the corresponding statistics.

Digital advertising formats in the U.S. 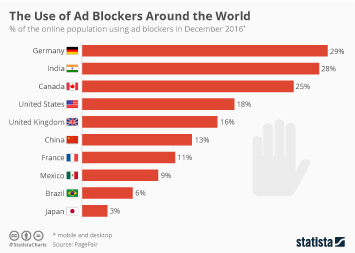