Mobile and digital payment is a rapidly growing market. Consumers in the United States are interested in many mobile payment services and activities. During a May 2019 survey, nearly half of of U.S. consumers said that they were interested in using their phone to make cashless payments while grocery shopping, and a further 44 percent of respondents stated that they would be willing to make cashless payments at the gas station. However, consumers were still wary about the security of mobile payments - protection against fraud and lost or stolen devices was on the top of the list of improvements that would make U.S. users more willing to try mobile payments.

In the following 3 chapters, you will quickly find the 20 most important statistics relating to "Square".

The most important key figures provide you with a compact summary of the topic of "Square" and take you straight to the corresponding statistics. 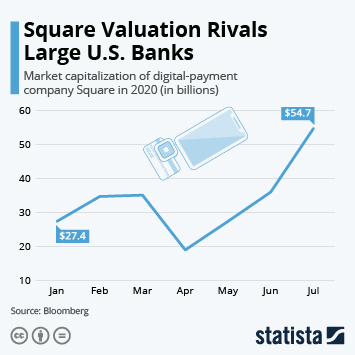