Published by
Martin Placek,
Jan 21, 2022
Virtually all wheeled land vehicles in operation, whether off-road or on-road, use tires. This dependence makes the tire industry an important component of the U.S. automobile industry. With around 8.8 million passenger and commercial vehicles being produced and over 14 million vehicles being sold in the United States in 2020, the U.S. market calls for a large number of tire manufacturers. The market for replacement tires in the United States was sized at almost 43 billion U.S. dollars in 2019.
To fully meet the demand for tires in the U.S., the country relies on imports, especially from Asian countries. In 2020, the U.S. imported around 34.9 million units of passenger car tires from Thailand and about 13.6 million units from South Korea.

The most used tires around the world today can be categorized under the pneumatic segment: they operate with air or gas under pressure. Their primary purposes are to provide traction between the vehicle and the road as well as shock absorption for impact.
Tires can be further categorized based on the type of vehicle they’re used for and whether they’re used on new vehicles coming from the factory - known as original equipment (OE) - or serving as a replacement for such tires.
Replacement passenger car tires are the leading segment with shipments of over 220,000 units in 2020. In the same year, some 36 million units of OE passenger car tires were shipped in the U.S., a decrease of almost 20 percent compared with 2019. This has likely been caused by a worldwide drop in car production in 2020, triggered by the COVID-19 pandemic and the subsequent shortage of chips.

In the following 3 chapters, you will quickly find the 24 most important statistics relating to "Tire market in the United States".

Statistics on the topic
Number of vehicles in operation in the U.S.
284m
Tire manufacturing gross output in the U.S.
16.7bn USD
The world's largest tire manufacturer based on revenue
Bridgestone

The most important key figures provide you with a compact summary of the topic of "Tire market in the United States" and take you straight to the corresponding statistics.

Tire manufacturers at a glance

Impact of COVID-19 on the automotive industry worldwide 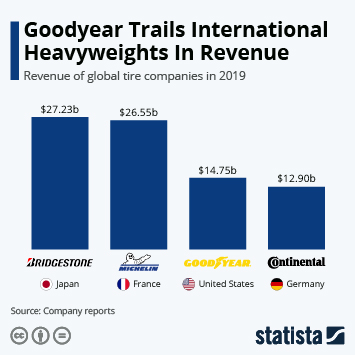