Published by D. Clark, Jun 15, 2022
In 2021, the gross domestic product of the United Kingdom amounted to approximately 2.2 trillion British pounds, compared with 2.04 trillion pounds in 2020, and 2.26 in 2019. The significant fall in GDP between 2019 and 2020 was due to the UK economy shrinking by 9.4 percent in 2020, which was a direct result of the Coronavirus pandemic. The UK was not alone in this respect; annual GDP growth rates in Europe falling across the continent in 2020. Despite this, the UK remained the world's fifth-largest economy in 2020, behind the United States, China, Japan, and Germany. As a share of the global economy, however, the UK fell from 2.41 percent in 2019 to 2.25 percent in 2020, with this share expected to fall further in the coming years.

The economic impact of the pandemic

The UK economy experienced such a severe economic shock in 2020 because it was also one of the worst-affected countries, suffering the highest death toll in Europe. The sudden and extensive lockdown that began at the end of March forced the closure of significant parts of the UK economy, resulting in a record 18.4 percent fall in monthly GDP in April. Although GDP growth returned the following month and reached a record growth rate of 9.2 percent in June, the UK economy was still 15 percent smaller than pre-pandemic levels. A second wave of the virus gripped the UK throughout the winter, resulting in the reintroduction of some restrictions that had been lifted in the summer. GDP growth slowed and even began to reverse again, with a growth rate of -2.5 percent reported in January 2021. As the UK emerged from this slump, however, positive growth returned, and as of early 2022, the UK economy is around the same size as it was prior to the pandemic. Annual GDP growth from 2022 onwards is expected to be slower however, with a GDP growth forecast of 3.9 percent for 2022, 1.8 percent in 2023, and 2.1 percent for 2024. .

Like many advanced market economies, the United Kingdom is heavily reliant on its service sector, which accounts for over 71 percent of GDP. In terms of gross value added (GVA), the real estate sector had the highest value of any industry, at over 264 billion pounds, followed by health and social work at almost 219.8 billion pounds. On a regional basis, London had a GDP of more than 503 billion pounds in 2019 or nearly a quarter of the entire UK economy. When adjusted for GDP per capita, the disparity between London and the UK average was even larger, at 56.2 thousand pounds and 33.2 thousand pounds, respectively. London also had the fastest-growing regional economy in the UK in 2019, with a GDP growth rate of 2.2 percent, compared to the UK average of 1.3 percent, and the West Midlands, which did not grow at all in that year.

In the following 4 chapters, you will quickly find the 30 most important statistics relating to "UK GDP".

The most important key figures provide you with a compact summary of the topic of "UK GDP" and take you straight to the corresponding statistics.

Employment in the UK

Inflation in the UK 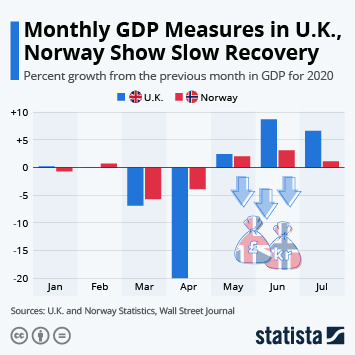 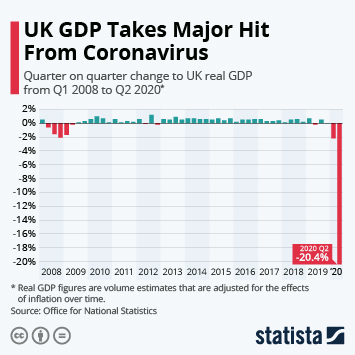