Published by D. Clark, Apr 8, 2022
The gross domestic product of the British economy was 2.2 trillion British pounds in 2021 and was the fifth-largest global economy, behind the United States, China, Japan, and Germany. In 2020, the UK economy shrank by a record 9.4 percent due to the economic fallout of the Coronavirus pandemic. In some ways, the UK economy has successfully recovered from the sudden shock of the pandemic. An annual GDP growth rate of 7.5 percent was recorded in 2021, and the unemployment rate has quickly recovered to its pre-pandemic levels of less than four percent. The inflation rate, by contrast, increased rapidly towards the end of 2021 and reached a thirty-year high of 6.2 percent in February, highlighting that despite the economic recovery, the UK looks set to enter its worst cost of living crisis since the 1970s, driven by rising prices, tax increases, and geopolitical instability.

The Cost of Living Crisis

Although many of the factors driving the current crisis were noticeable towards the end of 2021, the situation intensified the following Spring due to a series of price increases that have put immense pressure on British households. As of March 2022, approximately 83 percent of UK households reported that their cost of living had increased in the last month, compared with 62 percent in October 2021. On April 1, 2022, the average annual energy bill for a typical home in the UK rose significantly due to the energy cap (which limits what suppliers can charge per unit of energy) increasing on this date, with a further rise expected in October 2022. Additionally, this month saw National Insurance tax contributions rise by 1.25 percent due to the introduction of the Health and Social Care Levy, designed to help fund the UK's depleted health and social care system after the pandemic. The cumulative impact of all these factors on real household disposable income is expected to be a 2.2 percent decline, the biggest fall in living standards since at least 1956. It is unclear how long this crisis will last, with the annual inflation rate for 2022 expected to reach 7.4 percent and remain at the relatively high rate of four percent in 2023.

Although the UK government moved swiftly to mitigate the economic devastation of the COVID-19 pandemic in early 2020 by furloughing workers and protecting the incomes of the self-employed, its handling of the public health crisis was much less assured, and the country suffered a very high number of deaths in the initial wave as a result. In April 2020, the GDP of the UK fell by 18.9 percent, the biggest monthly fall in GDP ever recorded. Unemployment claims, which numbered 1.23 million before the pandemic, increased to 2.62 million by May. As Summer arrived, there were estimated to be just 343 thousand job vacancies, compared with 796 thousand before lockdown measures started. With cases falling, some parts of the UK economy began to open up, with the government providing aid to the ailing restaurant industry through the 'Eat out to Help Out' scheme. The end of summer coincided with the arrival of the second wave of the pandemic just as the government's trade negotiations with the European Union began to enter troubled waters. Although an agreement was eventually reached and ratified just before the end of the transition period, the arrangement has left the UK economically isolated from the rest of the continent.

In the following 5 chapters, you will quickly find the 52 most important statistics relating to "The UK economy".

The most important key figures provide you with a compact summary of the topic of "The UK economy" and take you straight to the corresponding statistics. 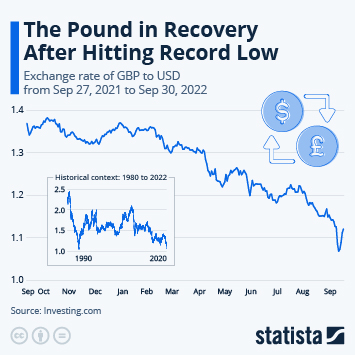 The Pound in Recovery After Hitting Record Low 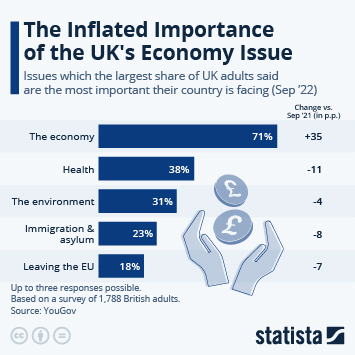 The Inflated Importance of the UK's Economy Issue