Published by Christina Gough, Sep 12, 2018
Motor sports comprise a number of competitive sporting events, principally racing, involving the use of motorized vehicles. Most commonly these vehicles are automobiles or motorcycles, but can include airplanes, drones, trucks, or even lawnmowers. The International Automobile Federation (FIA) is the governing body for auto-racing worldwide while the global governing body for motorcycle racing is the Federation of International Motorcycling (FIM). Auto-racing is ranked among some of the most popular sports in the U.S. Globally, annual sponsorship spending in motor sports amounts to over 5 billion U.S. dollars.
The two sets of vehicle classes for auto-racing motor sport competitions are open-wheel and enclosed-wheel racing. Globally, open-wheel racing is championed by the “Formula” series, while in the U.S. the pinnacle of open-wheeled racing competitions is the Indy Car series, the jewel of which is the Indianapolis 500. Among motor sports race teams, Ferrari is the most valuable Formula 1 team brand, with revenues of around 349 million U.S. dollars generated in 2016. Other leading Formula 1 teams include Mercedes and McLaren. In terms of race wins, Germany’s Michael Schumacher is the most successful driver in the history of Formula 1, as well as by number of world championships won, and number of podium finishes. RedBull is the leading motor sport sponsor, having invested 110 million U.S. dollars into motor sports in 2016.

Enclosed wheel racing include sports car racing, stock car racing, and touring car racing. NASCAR is the preeminent organizer of stock car racing and is one of the world’s most valuable sports event brands. The highest valued NASCAR team is Hendrick Motorsports, while the Daytona 500 is stock car’s highlight event. The brand value of Daytona 500 in 2017 was 140 million U.S. dollars and, in 2018, TV viewership for Daytona 500 in the U.S. stood at around 9.3 million.

In the following 3 chapters, you will quickly find the 17 most important statistics relating to "Motor sports".

Statistics on the topic
Share of Americans whose favorite sport is auto racing
6%
Brand value of the Daytona 500 in 2017
140m USD
Global motor sports sponsorship spending in 2017
5.75bn USD

The most important key figures provide you with a compact summary of the topic of "Motor sports" and take you straight to the corresponding statistics.

Motorcycle Industry in the U.S. 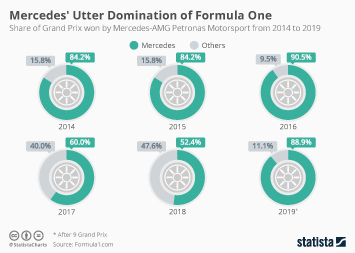