Published by
Christopher Hughes,
May 10, 2022
Similar to countries like Canada, the USA and New Zealand, Australia has a history of European colonization, and throughout its past has relied on immigrants for population growth and workforce expansion. Immigration to Australia has previously consisted mostly of people of Western-European origin, which was largely due to exclusionary immigration policies under the “White Australia Policy”. However, since these policies were dismantled in the 1970’s, Australia’s migrant population has become increasingly diverse and the country has seen significant growth in migration from neighboring countries in Asia, as well as the middle east and southern Europe. Today, Australia is considered to be one of the world’s major “immigrant nations” and well over a quarter of the population is born overseas.
A significant proportion of Australia’s population growth is the result of migration. In 2020, net overseas migration to Australia showed a population increase of approximately three thousand people. With Australians living longer and having fewer children, the Australian economy relies on this population growth to boost the number of working age residents and to balance out Australia’s ageing population. Migration is likely to become even more important into the future, as the average age of the population is predicted to reach 40 years by 2030.

Immigration in Australia tends to occur in waves and has changed with the times. While the early inception of the country focused on migrants from the UK and other parts of western Europe, large numbers of Italian and Greek immigrants came as economic migrants post-World War II. The early 2000s showed a rapid increase in the number of immigrants from Asian countries, with China and India dominating more recent immigration figures. In 2018, more than 40,000 people from China entered the country than those that left, and the Indian immigrant population increased by around 55,000 people. Although English migrants are still the largest group of foreign-born residents of Australia, Chinese, Indian, the Filipino and Vietnamese migrants are among the top ten countries of birth of Australian residents.

Gaining an Australian permanent visa is not a simple process. New migrants must satisfy a number of requirements and often need to demonstrate they have a familial connection in Australia or skills required in the workforce. Both in the past and present, it is qualified, skilled migrants that have been of highest priority for the Australian migration program. The 2019-2020 program, which was capped at 160,000 places, reserved almost 70 percent of places for skill stream visas and the impact of these policies can be seen in the migrant population. The vast majority of permanent migrants in the country hold a skilled migrant visa and well over a third hold at a bachelor’s degree or higher. However, of the temporary visa types, skilled temporary work visas are overshadowed by student visa types. Considering that international education export totaling more than 37 billion Australian dollars over the 2019 financial year, it is clear that migration offers significant economic benefits to Australia.

In the following 5 chapters, you will quickly find the 29 most important statistics relating to "Migration in Australia".

The most important key figures provide you with a compact summary of the topic of "Migration in Australia" and take you straight to the corresponding statistics.

Travel and tourism industry in Australia 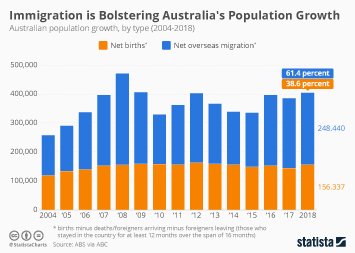