Published by L. Granwal, Nov 17, 2022
As of 2018, the total number of internet users worldwide was 3.9 billion. The number of users in the Middle East was during this time 164 million and 121 million in North Africa. The internet penetration rate in the Gulf Cooperation Council is the highest amongst all sub-regions of the Middle East and North Africa. The penetration Rate for the United Arab Emirates was 91 percent for 2018 and for Saudi Arabia 73 percent in the same year. In comparison the leading country in North Africa, Egypt, had a penetration rate of 43 percent during the same time period.
In contrast to 2011, the majority of internet users spend their time on mobile devices instead of a desktop. As of 2019, worldwide per capita usage of mobile internet was 132 minutes, compared to 49 minutes on a desktop. During the same time period, the per capital usage of the internet in the Middle East and North Africa was about 175 minutes per day on a desktop. On average Egyptians spent 490 minutes daily in the internet, compared to 496 in the United Arab Emirates and 405 minutes in Saudi Arabia. Except for South America, men tend to spend more time online than women. The Arab states comply with the global norm, where the internet user rate for men is 48 percent and 39.4 percent for women.

The leading method of accessing the internet in the Middle East and North Africa is through mobile devices. As we can see from the example of Saudi Arabia, the penetration rate of mobile internet in Saudi households is about 91 percent compared to 26.2 percent of Saudi households with a fixed broadband subscription.

Share of mobile internet users per population across the United Arab Emirates was 96 percent, compared to 88 percent in Saudi Arabia. The Rate for Egypt for the same time period was 47 percent.

In the following 5 chapters, you will quickly find the 20 most important statistics relating to "Internet usage in MENA". 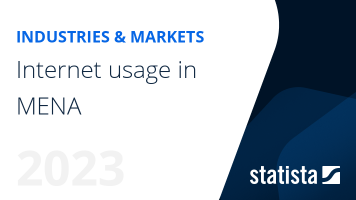 The most important key figures provide you with a compact summary of the topic of "Internet usage in MENA" and take you straight to the corresponding statistics.

Internet usage in the United States 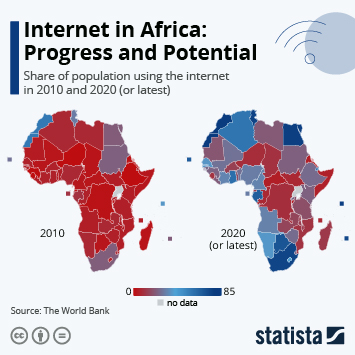