The Japanese advertising market is one of the largest advertising markets worldwide. Total advertisement spending saw stable growth until the spread of the novel coronavirus (COVID-19) in 2020, which led to a decrease of the market size by about 780 billion Japanese yen. In 2021, the market recovered considerably and reached a value of 6.8 trillion yen, which was close to pre-COVID-19 levels. Given its size, the advertising market is one of the most important markets for Japan. It regularly accounts for more than one percent of the country’s nominal gross domestic product (GDP).

Similar to the situation in many other countries worldwide, the advertisement market in Japan currently sees a strong division in terms of growth potential between traditional media, such as magazines, newspapers, television, and radio, and the new possibilities that online advertising brings. Today, the internet is the most important advertising medium worldwide. In Japan, internet overtook television as the leading medium in terms of advertising expenditure for the first time in 2019. Internet ad spending in Japan more than doubled between 2016 and 2021, while ad spending for television decreased during the same period. Thus, online ad spending contributed significantly to the robustness of the market as a whole.

The advertisement market in Japan is dominated by the two most prominent advertising agencies Dentsu and Hakuhodo, whose headquarters are located in Tokyo. Other major competitors include companies such as CyberAgent (Tokyo), Daiko (Osaka), and ADK Holdings (Tokyo). Dentsu, in particular, holds a dominant position in Japan. Founded by war correspondent Hoshiro Mitsunaga as a news and advertising agency in the early 20th century, it developed strong relationships with media outlets and ad spenders. Today, its operations are spread over hundreds of subsidiaries. It is common for Dentsu not only to offer solutions for several steps of the marketing process, but also to service competing clients of the same industry. The company also played an important role in organizing sponsorship for the Summer Olympics in Tokyo, which were held in 2021 after being delayed due to the COVID-19 pandemic.

Establishing a memorable connection with audiences

The advertising industry plays a vital role in the Japanese economy as product cycles in Japan tend be very short in many cases and consumers constantly demand something new. Domestic companies dominate the advertising market in Japan, notably one of the world's most creative ad markets. Japanese advertisements are said to concentrate less on selling the benefits of a new product, and instead focus more on establishing an emotional and memorable connection with the audience. Important factors in this regard include the use of celebrities and mascots as well as novel aesthetics and catchy music.
This text provides general information. Statista assumes no liability for the information given being complete or correct. Due to varying update cycles, statistics can display more up-to-date data than referenced in the text.
Published by Statista Research Department, Jun 13, 2022

Advertising expenses in Japan 2021, by medium

Businesses with the highest advertising expenditures in Japan 2021

Advertising expenses in Japan 2021, by medium 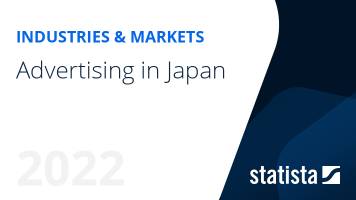 The most important key figures provide you with a compact summary of the topic of "Advertising in Japan" and take you straight to the corresponding statistics.