Published by Statista Research Department, Sep 10, 2020
Scotland is one of the four constituent countries of the United Kingdom (UK) with a distinctive culture, including its own language, customs, politics, holidays, music and sport. Sport in Scotland is managed by the organization sportscotland. Established in 1972, sportscotland distributes governmental resources for the development and promotion of sport and physical activity in Scotland. Under sportscotland, there are a range of sport-specific governing bodies, such as the Scottish Rugby Union and Scottish Rugby League for the sport of rugby, for example. In 2016/17, sportscotland invested approximately 21 million British pounds of government grants and lottery funds, with aquatics, football and golf receiving the largest single investments of any sport.
When it comes to participation, as in any other country, it varies depending on the type of sport. Football, for example, is played by roughly seven percent of adults on a monthly basis while swimming is something that 17 percent of adults do at the same rate. The 35-44 age group is most active in swimming.

Sport is an important activity that brings many health, mental health, cultural and social benefits to its participants. From 2007 to 2018, the share of Scottish adults who have participated in any form of sporting activity in the previous four weeks has remained relatively stable at around half of the population, reaching its highest share of 54 percent in 2018. There are many factors that appear to influence the participation rate with significant variations present amongst different sports. There is a noticeable age and gender variation to the proportion of the population that participated in sports.

In the following 6 chapters, you will quickly find the 43 most important statistics relating to "Sport in Scotland". 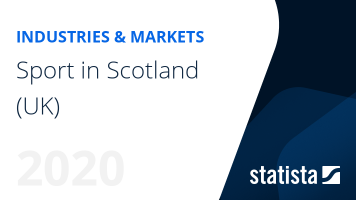 The most important key figures provide you with a compact summary of the topic of "Sport in Scotland" and take you straight to the corresponding statistics.